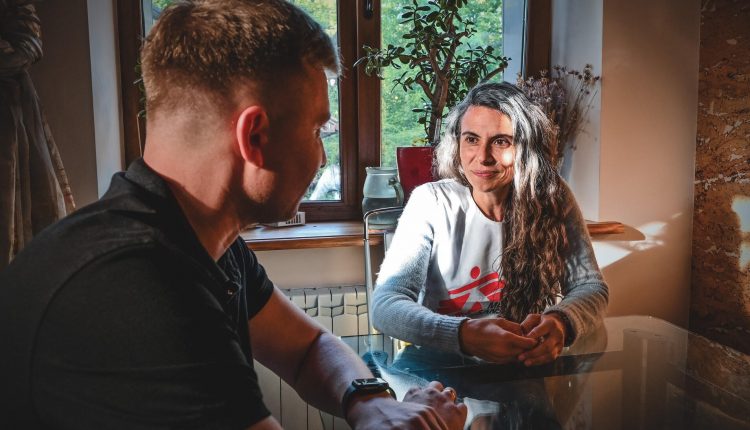 After 100 days of the war in Ukraine, our mental health teams across the country are raising the alarm on the worrying psychological symptoms they are seeing

“I feel fear in my soul. My fingers and hands begin to get cold,” says Vira, an elderly woman who fled the Donetsk region and is now seeking shelter in Ivano-Frankivsk, in the southwest of Ukraine.

“I’m worried about my relatives, who are still at home – my son is still living where there is fighting. I don’t feel heartache, what I feel is deep in my soul and it immediately brings me to tears. I can’t describe how it is.” 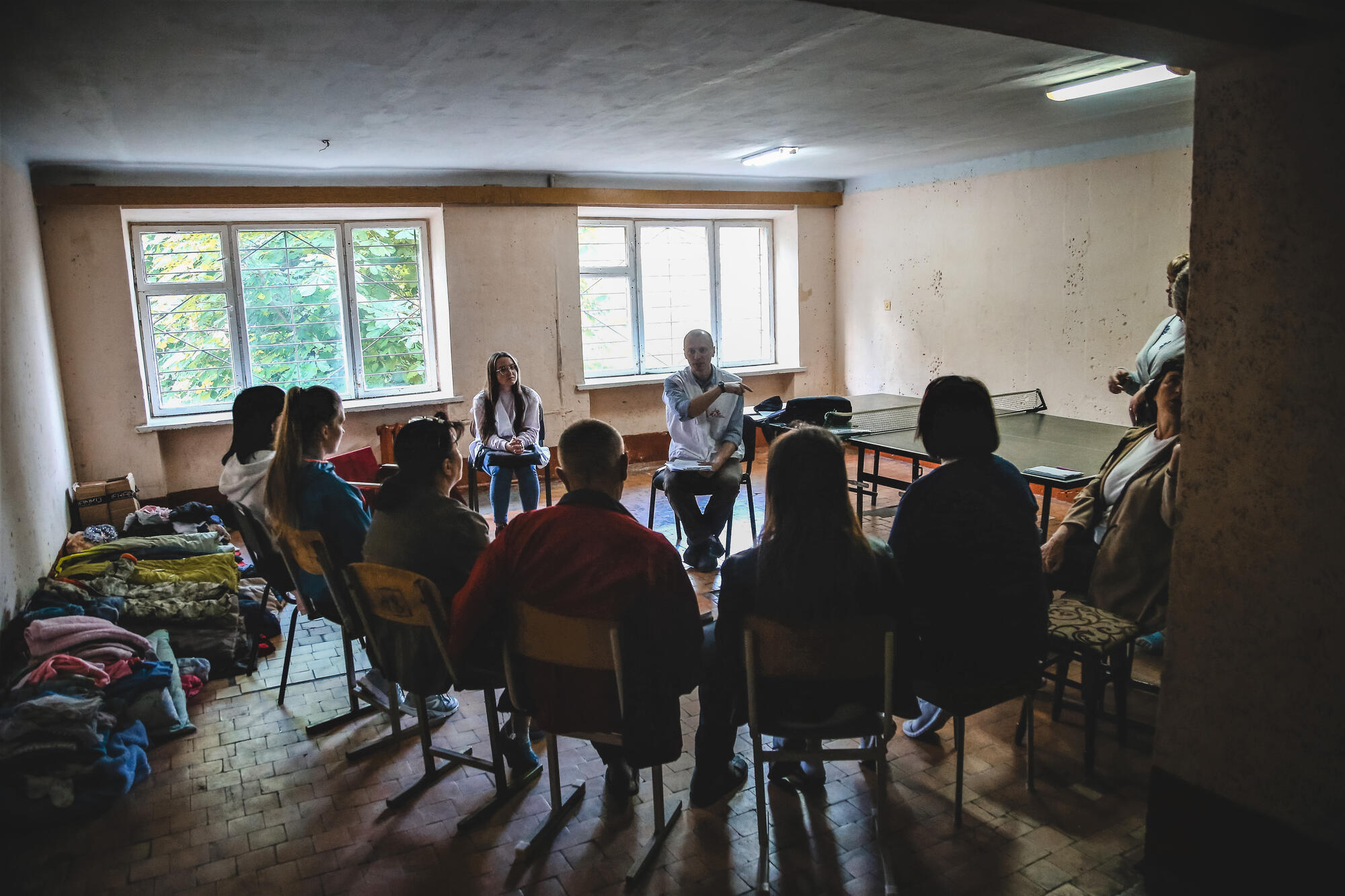 As a result, the psychological consequences of the current conflict can seem invisible, but that doesn’t mean they aren’t there.

“The elderly, who often find themselves alone after being separated from loved ones, are constantly anxious and break down into tears.”

Our teams have been providing mental health support in shelters for displaced people, at mobile clinics in remote villages, and in urban metro stations.

Between mid-April and mid-May, MSF conducted over 1,000 individual and group mental health sessions in Ukraine. 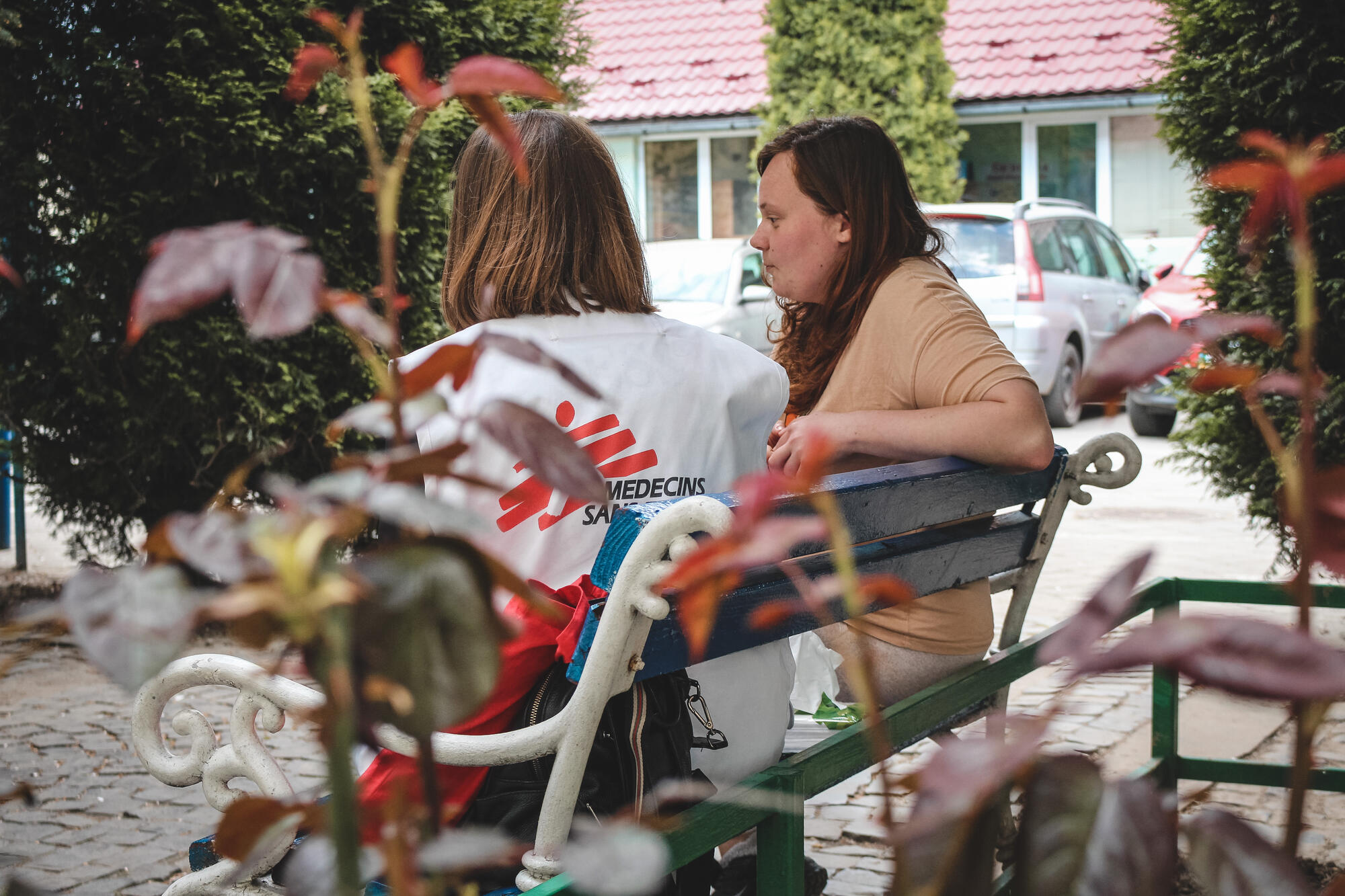 Normal reactions to an abnormal situation

Many of the most vulnerable people, such as the elderly, are isolated; having been separated from their neighbours and relatives who were their support network.

Meanwhile children often pick up on the stress that adults around them are feeling.

“One issue we deal with is trauma-related stress,” says Vykhivska.

“For example, people’s memories of hiding in basements during heavy shelling could be triggered by words, sounds, smells, or scenes that are reminiscent of the original trauma.”

“We also see people with a lot of anxiety-related symptoms, such as insomnia and constant worrying about the future,” she says.

“People who normally are not affected are now stressed.”

Mental Health in Ukraine: “Struggling with the fear of death”

Kateryna had to flee her home in Irpin with her mother when their village was attacked.

They were evacuated and are now living in a shelter in Mukachevo in the far west of Ukraine.

Here, Kateryna sees an MSF psychologist becauseshe has suffered from panic attacks since escaping her village.

“One of the things I’m struggling with is the fear of death,” she says.

“I’m scared that I will fail to do something, or that I’ll do something wrong and won’t make it.

I think about it again and again, and it prevents me from doing anything.”

These reactions are not unusual when living through war, says Lina Villa, MSF mental health activity manager in Dnipro and Zaporizhzhia (Ukraine)

Our teams here visit shelters where hundreds of thousands of people have escaped the heavy fighting in the east and south of Ukraine.

Here, psychologists try to stabilise patients by identifying the issues they are facing, and then help them find coping mechanisms.

“We try to help our patients to regain some level of control in a very uncontrollable and uncertain situation, by understanding and expressing what they feel,” says Villa.

“We try to reassure them that stress, fear, anxiety, sleeplessness are normal reactions to this abnormal situation.”

“It’s vitally important that people can express and exercise their feelings and emotions after facing traumatic situations,” she says.

“If not addressed, these emotions can snowball and become more severe.” 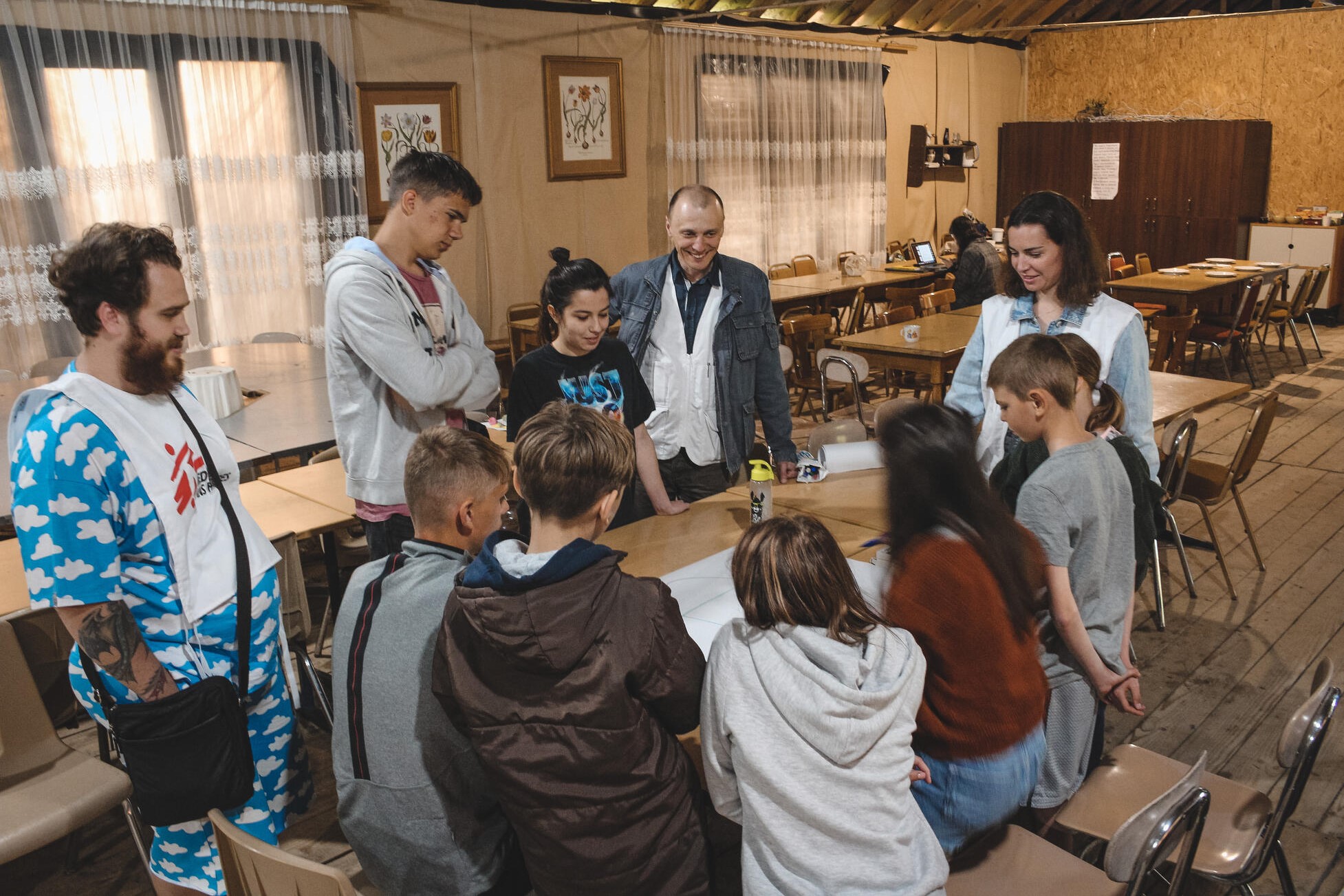 In Berehove, MSF psychologists work with children who have been evacuated from conflict areas.

Between 4 April to 20 May, 375 children participated in group and individual mental health sessions here.

Children show symptoms from the trauma they have experienced both before and during their evacuation, including anxiety, low self-esteem, panic attacks and grief.

“Many have trouble sleeping, some have started to stutter, some wet their beds,” says Kucheriaviy Valerii, MSF psychologist in Berehove.

To help them cope, psychologists have different practical methods they work through with the children.

One is making paper birds; children cut them out and fold the wings while putting their positive emotions and thoughts into this process.

“I recommend they sleep with this bird; it can help calm them down,” says Valerii.

While MSF is providing mental health support and additional training to psychological staff in medical facilities across Ukraine, much more needs to be done.

“We need to see an urgent increase in mental health services across the country,” says Vykhivska.

“Both the national health system and other organisations need to ensure that the response to mental health needs and the resources behind it reach the most vulnerable people, especially in rural areas, where people are often cut off and lack access.”

It is crucial this support is provided to people where they are and that it involves close collaboration with communities so that everyone who needs help receives it.

Biological And Chemical Agents In Warfare: Knowing And Recognising Them For Appropriate Health Intervention