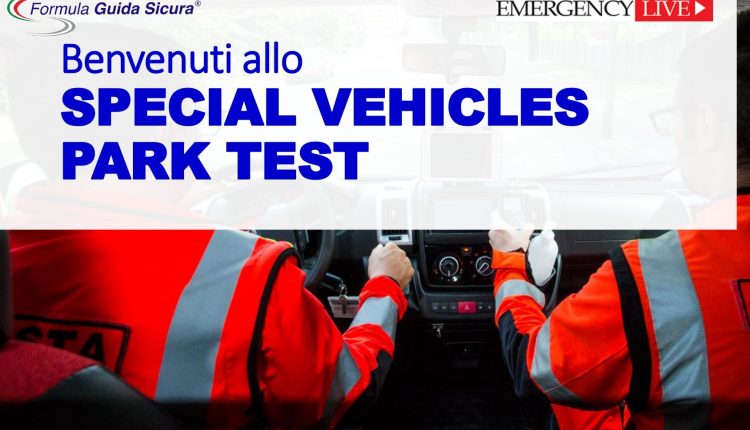 On 25 and 26 June the first edition of the Special Vehicles Park Test took place, the event organised by Formula Guida Sicura and Emergency Live, dedicated to ORION ambulances

On 25 and 26 June, the first two days of the Special Vehicles Park Test were held at the Grosseto Exhibition Centre, the event that put ORION emergency vehicles to the test

DO YOU WANT TO TEST YOUR KNOWLEDGE AS A RESCUE DRIVER? ENTER THE FORMULA GUIDA SICURA BOOTH AT EMERGENCY EXPO

Set up on the initiative of Formula Guida Sicura, one of the most important companies in the world of emergency driver training, and our magazine Emergency Live, the Special Vehicles Park Test allowed emergency drivers to try out the ambulances made available.

Participants had the opportunity to try out the Orion vehicles, suggest possible improvements and rate the vehicle driven.

THE NUMBER ONE IN AMBULANCE FITTING IN ITALY: VISIT THE ORION BOOTH AT EMERGENCY EXPO

This was an excellent opportunity for the outfitters, who were able to let drivers try out the latest generation of ambulances, obtaining constructive feedback from those who work on rescue vehicles every day.

At the same time, drivers and associations were able to get to know the ambulances more closely, trying them out on the road with specific technical driving tests.

The participants were subjected to fifteen tests: personal liking of the vehicle (5 minutes), road driving tests up to 110km/h (15 minutes) and driving tests on specific areas (20 minutes).

At the end of the tests, the drivers, who were always flanked by a Formula Guida Sicura instructor during the tests, had to give their assessment to the vehicle independently.

The ambulances made available by ORION and tested were the FIAT DUCATO 160 hp set up MAXIMA and the VOLKSWAGEN TRANSPORTER 200 hp set up DOMINO: the test was won by the first of the two vehicles.

Special Vehicles Test Park: we collected the opinions of the rescue drivers who took part in the event: each of them expressed a positive opinion of the two days

“I took part in the event on 25 June,” writes Alberto, “and I found it very interesting and useful.

Giving the opportunity to try out vehicles first-hand on different circuits is something that doesn’t happen every day.

The event was structured and managed very well in all respects. Definitely an event to recommend and to be repeated.”

Alessio writes, “Regarding last weekend’s event in Grosseto, it was very interesting and in some ways exciting to be able to test the vehicles I use every day for work under conditions of maximum stress.

All this to be able to test what the limits of such vehicles are.

In addition, I really appreciated the outfitter’s intention to get in touch with the users to try to understand what aspects need to be corrected to improve these products.”

Michele was “delighted to have taken part in the event because, for the first time, I had the chance to take on the role of test driver and evaluate the vehicles tested.

It is not so obvious to find companies that get involved and accept advice/criticism from people who use their equipment more or less frequently.

Thank you again for the invitation to the event and the opportunity to express your opinion.”

For Nicotra, “the initiative in question was a great way to get involved, testing one’s skills and above all expanding them thanks to the instructors, plus the great opportunity to try out several vehicles and therefore different driving dynamics.”

For Cosimo, too, participating in the Special Vehicles Park Test proved to be very interesting

“The event,” said the rescuer, “gave me the chance to get to know and test new vehicles and to analyse them not only from an aesthetic point of view but also from a practical one, taking them to situations very close to everyday activity.

Analysing the behaviour and suggesting possible modifications to the manufacturer by highlighting the problems I think is important.

My compliments for the organisation and the idea.”

The event was a success and we look forward to repeating it.

Rescue Seen By Voluntary Associations: A Look At Garda Emergenza

Volkswagen AG Has Awarded The PremiumPartner Certificate For Tamlans Oy

Heart: what is Brugada syndrome and what are the symptoms

Wasps, bees, horseflies and jellyfish: what to do in the event of a sting or bite?