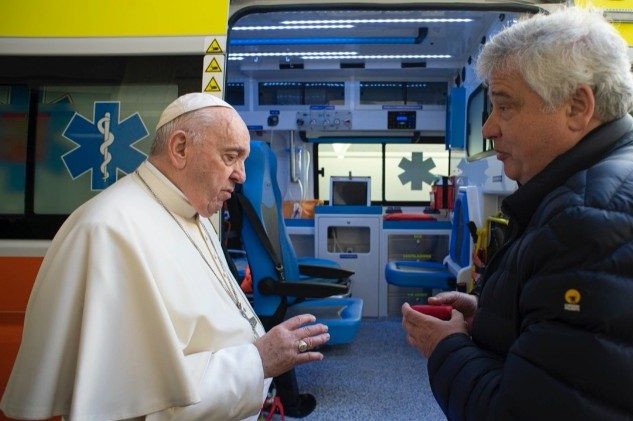 Ukraine: Pope Francis' ambulance for Lviv to be delivered by Cardinal Krajewski

War in Ukraine, the ambulance Pope Francis donated is a gift for the city of Lviv: it will be used to help the population

The ambulance donated by Pope Francis to Lviv (Ukraine)

According to the rector of the Apostolic Capital, Matteo Bruni, on Saturday, 26 March 2022, Cardinal Conrad Krajewski, papal almoner, will set sail again for Lviv to deliver mobile emergency aid which is a gift from Pope Francis, whom he personally blessed this weekend.

The vehicle will be a gift to the municipal authorities to help the population, whose numbers have increased significantly in recent years due to the arrival of refugees.

Cardinal Conrad Krajewski recently returned from Fatima, where on the instructions of Pope Francis he dedicated an act to the Immaculate Heart of Mary in Ukraine and Russia.

Before Our Lady of Fatima,” he told Vatican journalists before embarking on the journey, “I asked her to protect Ukraine, which is experiencing a war, as well as to bless the new mission that I will carry out at the Pope’s request on my return to this country.

The cardinal announced that he was embarking on his trip with “a heart full of hope”, after praying with the 15,000 faithful who gathered at the Fatima Shrine to join Pope Francis.

The service was attended by 25 bishops and the president of Portugal.

“Everyone prayed together with me for the Pope,” the Elemosinario Pontiff added: “Faith is able to put an end to war, I am going to Ukraine with all my heart to see the concrete results of Mary’s act of incorporation.”

The patient complains of blurred vision: what pathologies can be associated with it?