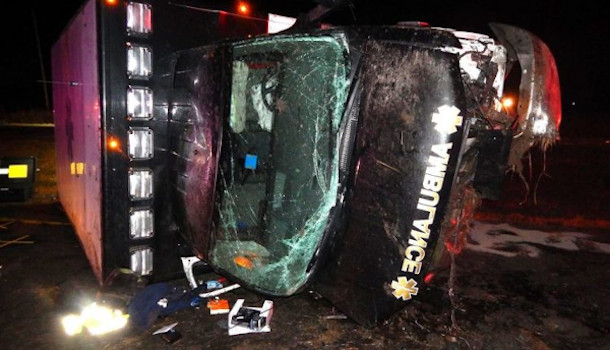 Dozing off driving the ambulance: the biggest problem of paramedics

It’s easy losing the ambulance control when the driver exaggerated with the waking hours, even the most expert paramedics. The best way to avoid dozing off? Leaving another colleague drive.

The nightmare of every EMD is dozing off. It can cause an ambulance crash, massive road accidents and heavy damages to people and the environment, even for the most expert paramedics driving an ambulance. Surely this is a phenomenon that can cause or contribute to serious road accidents for the following reasons:

Even if during a vehicle’s ride, it can happen having dozed off and someone is trying to wake us up, it is not expected that the vehicle’s control can be resumed in time to stop the race and avoid tragedies.

Which factors cause dozing off while driving an ambulance?

This problem in the EMS world is often linked to stress and fatigue that many drivers develop especially after many hours of driving or without sleeping. Dozing off at the wheel can provoke many effects, such as the loss of vigilance limited even to a few seconds, but sufficient to change the direction of the vehicle during the ride with unpredictable and terrible consequences.

The conditions which can increase the possibility of dozing off are certain factors as alcohol, driving after a

copious meal, especially if based on proteins (meat, cheese and so on) which “runs” a lot of blood to the digestive system “taking it away” from brain and consequently, causing a reduction of driving attention. Drowsiness becomes dangerous also when the person has been awake for too many hours, or if decided to continue driving after an excessively stressful shift.

The paramedics who are driving an ambulance must develop self-awareness of his own limits that makes him objectively effective in driving, and capable of removing himself from this role when there is an inkling of the risk of falling asleep.

There are also other important phenomena due to organic causes that cause the sleeping stroke to manifest as “narcolepsy” or the brain’s inability to regulate the sleep-wake rhythm and “cataplexy”, i.e. the loss of muscle tone due to strong emotions. Narcolepsy and cataplexy can compromise the driver who cannot foresee the moment in which the situations described above occur.

These EMDs should not drive, except with the help of drugs that prevent the aforementioned phenomena and in any case limiting as much as possible the activity of driving the vehicles and possibly doing so if accompanied.

Dozing off is always lurking! Ambulance paramedics must – at the first signs – stop in a non-dangerous area and, if driving an emergency vehicle, ask to be replaced by a colleague. This behaviour is a sign of great responsibility for the driver him/her self, colleagues, of course, patients. Everyone’s safety is at stake. The National Highway Traffic Safety Administration (NHTSA) of the US published a special crash investigation on a case of ambulance incident due to a drowsy practitioner, analysing all the phases of the crash and the damages.

How paramedics can prevent dozing off while driving the ambulance?

The driving position, mental attitudes, rules of behaviour and use of onboard devices are of great importance. Let us talk about some systems that technologically help the EMS workers in these cases, in order to find himself with advanced support that identifies the onset of falling asleep and how to avoid it.

The first device is the lane-keeping system and lane-keeping assistant, which avoid road leaks. Often during a medical transport, you find yourself in tedious and monotonous driving conditions. One can easily reach a lack of concentration. This technology constantly calculates the driving factors that can cause fatigue and defines, together with other data, a parameter of “potential fatigue”. These systems work as anti-sleep alarms. When the proximity to the line, speed, use of the flashers or accelerator pressure reaches certain limits, a buzzer sounds.

A real revolution is alleged to be the mechanism of the autonomous emergency brake. The electronic systems that equip the various car manufacturers are different in programming and logic, but all have a basic idea: something the driver does not see is positioning itself and it is necessary to slow down immediately. There are systems that start from a few kilometres per hour and reach urban speed (50 km / h), others that can stop the car completely in case of danger. Long story short, this technology, that already equips several cars and several vans is an “in extremis” solution when it is needed and raises safety by reducing the risk of a collision. Thinking about it, in urban conditions for an ambulance, this system can be useful in different situations.

This system is the one that comes closest to semi-automatic driving but can hardly be used in emergency driving. The Adaptive Cruise Control, in fact, monitors with radar the distance from the vehicle in front of us and adapts to its speed, keeping an effective safety distance in case of a stop. The goal of these systems, like the device to maintain the lane, is to guarantee a more comfortable journey, but it is not exactly what the world of rescue can do.

The radio alarm for the cars that surround us

In the UAE, and now also in Germany and Norway, a system is being developed to alert drivers of cars that an emergency vehicle is about to arrive. In the most salient phases of the pre-hospital intervention, in fact, this system can guarantee, within a hundred meters in front of the ambulance, a “gap” in cars that move because the signal of the siren of the emergency vehicle arriving.

There are other systems that can really become important in driving emergency vehicles. There are many systems of sensors that detect the pressure of the driver’s hands on the steering wheel, in order to measure the intensity of the pressure and the degree of suitability to drive the driver through different checks.

How to become a paramedic? Some tips on entry requirements in the UK

A Tesla car on ‘autopilot’ collided against police and ambulance vehicles

Special ambulance crush investigations in the US

Violence against EMS providers - Paramedics assaulted on a stabbing scenario