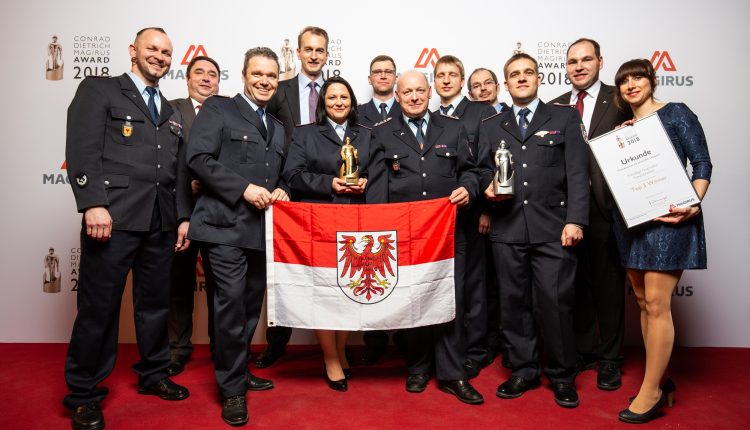 Ulm, March 2, 2019
Fire departments from all over the world gathered at the Congress Centre Ulm (Germany) on Friday evening where for the sixth time in a row the Conrad Dietrich Magirus Award – also known as the “Oscar of the Firefighting Industry” – was presented. The São Paulo Fire Department was delighted to take home the coveted award as “International Firefighting Team 2018” for its firefighting operation in a high-rise. The top three international nominees also included the Prague FD, which entered its fire-fighting deployment at a historic hotel as well as the Mexico City FD, which was honoured for its work after an earthquake. The title “National Fire Department Team 2018” was received by the Volunteer Fire Department from Treuenbrietzen (Germany) for its operation fighting the largest forest fire in Brandenburg’s history. The Special Prize for Social Engagement also went to a German team: the Volunteer Fire Department from Waltershausen received the award for its 100 km charity run.

The winners’ courageous missions saw them fight off stiff competition from teams from all over the world and they were subsequently honoured at the awards ceremony in front of some 600 invited guests. “With the Conrad Dietrich Magirus Award, we not only show our respect for every single operation and thank every firefighter for their individual commitment, but also highlight the regularly outstanding performances of fire departments around the world bringing them to the attention of the public”, says Marc Diening, Magirus CEO, in his welcome speech. “This year’s competition has also seen outstanding performances – from firefighting to technical and social assistance to disaster relief –all of which are exemplary in demonstrating the daily importance of firefighters in our society.”

Humedica and Team Hahn Racing sponsor awards
The coveted Conrad Dietrich Magirus statues were presented this year by the German aid organization
“humedica e.V.” and “Team Hahn Racing”, five-time winner of the European Truck Racing
Championships.
Since 1979, humedica has provided humanitarian aid around the world, especially after major natural disasters such as earthquakes or tsunamis. Wolfgang Groß, who founded the organisation 40 years ago with his brother and who sponsored the awards together with medical emergency team member Daniel Warkentin, was impressed by the operations presented: “People were evacuated from burning houses; entire villages protected from fire. Teamwork can save lives – this evening, we’ve seen impressive cases of this. It is also something that we, too, see over and over again in our missions.”

Teamwork is also the priority of the second sponsor of the evening. “Team Hahn Racing” has won the European Truck Racing Championships five times. Since 2017, they have entered international truck racing competitions as the “Iveco Magirus Bulls”. “Navigating a 1,100-horsepower truck in extreme situations is only possible with a perfectly functioning team”, says driver Jochen Hahn. Together with his colleague Rijk Schuhmacher, he paid tribute during the evening to all of the fire department team members on stage.

Brazilian teamwork par excellence
Perfect teamwork is the distinguishing feature of the “International Firefighting Team of the Year 2018”.
On May 1, 2018, a 25-storey high-rise in the middle of São Paulo went up in flames. Within seconds, the flames in the dilapidated building spread to two other buildings. Up to 150 squatters were living in the former building of the Federal Police. In a joint effort, 170 members of the São Paulo Fire Department fought to control the fire and bring all persons to safety. As rescue operations in the building were underway, however, the building abruptly collapsed. With combined strength, the forces searched the debris and simultaneously fought the fire. The firefighters worked for nearly 300 hours; seven people lost their lives in the fire. With its submission, the São Paulo Fire Department prevailed against teams from all over world and was thus able to take home the coveted Conrad Dietrich Magirus Statue. In addition, a visit to the best-known fire brigade in the world, the Fire Department City of New York (FDNY), awaits the winners. 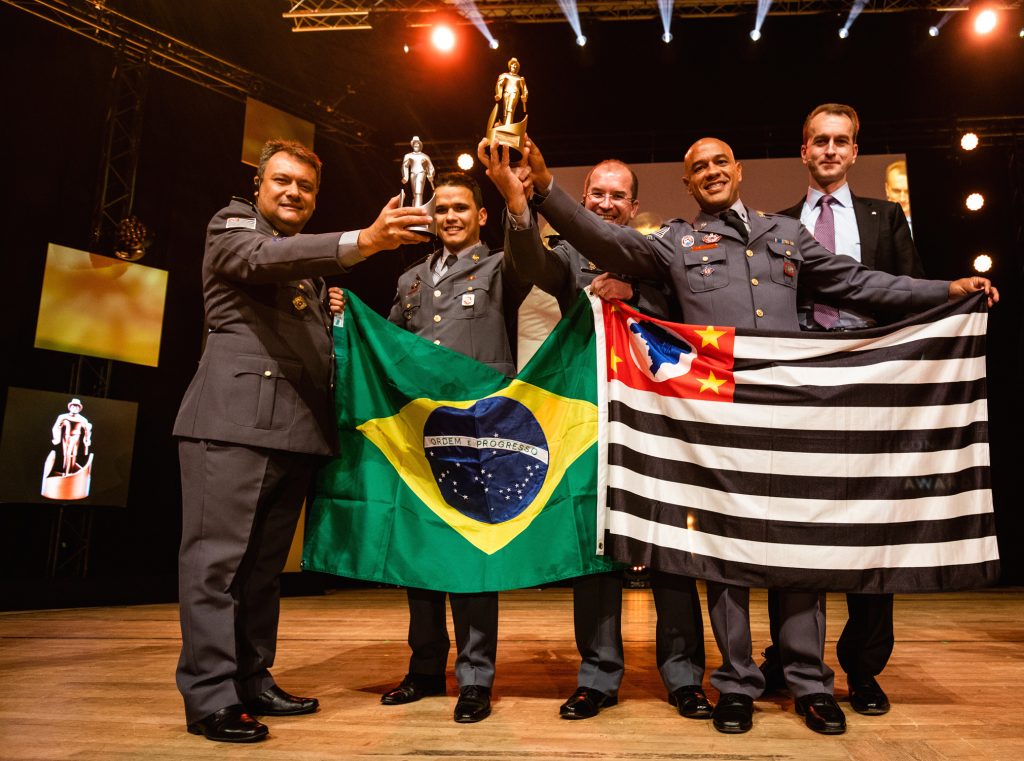 Special Prize for Social Engagement
This year, the Special Prize was also given at international level and was won by a fire department team from Germany. The athletic team of the Volunteer Fire Department from Waltershausen in Thuringia was awarded the “Special Prize for Social Engagement” for its 100 km fire department charity run. The athletes were able to donate € 14,500 to Paulinchen e.V. – an initiative for children with burn injuries. In addition to the coveted award, the athletic team won an individual firefighting training course with the Magirus Fire Fighter Academy.

Distinguished jury members
An expert jury comprising Paul Baxter, Commissioner Fire and Rescue New South Wales, Michel Bour,
Secretary General of the World Firefighters Association CTIF, Danielle Cotton, London Fire Commissioner QFSM, Hermann Kollinger from the Austrian Fire Department magazine “Brennpunkt” and Markus Görtler from Magirus chose the best applications which were then published online for the public to vote for. The entry that received the most votes from the jury and the online voters, was declared the winner.

Conrad Dietrich Magirus Award Sponsors
In 2018, the Conrad Dietrich Magirus Award was again supported by renowned companies in the firefighting industry. Emergency One (UK) Ltd., ENDRESS Elektrogerätebau, DÖNGES as well as LUKAS/VETTER/AWG who provided support during all phases of the competition – from the application announcement and submission process to the awards ceremony in Ulm. Underline photo:(Copyright Magirus).

About Magirus
Passion and precision, high-tech and craftsmanship. Since 1864, Magirus has combined innovation and tradition to assist firefighters throughout the world. With a comprehensive range of state-of-the-art, reliable fire engines, turntable ladders, rescue and equipment vehicles, special solutions, pumps and portable pumps, Magirus is known globally as one of the largest and technologically leading providers of firefighting and disaster control technology.
Magirus is a brand of CNH Industrial N.V. (NYSE: CNHI / MI: CNHI), a worldwide leading company in the capital goods sector with a broad spectrum of products and a global presence.

A Terror Attack with Dramatic Consequences