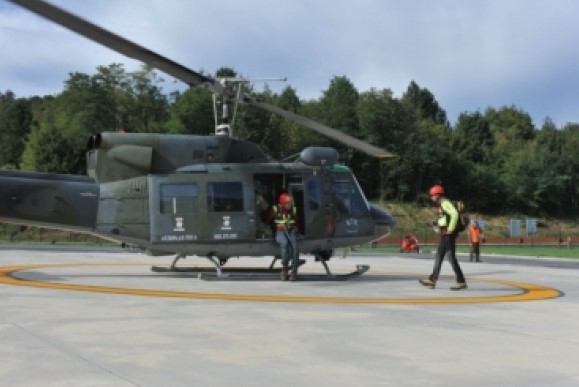 Organised by the Italian Air Force with the support of the Corpo Nazionale Soccorso Alpino e Speleologico (National Alpine and Speleological Rescue Corps), the GRIFONE 21 exercise involved the men and women of the Defence Force and other State bodies and administrations

Exercise “Grifone 2021” ended today in Sardinia, after a week of intense activity

Organised by the Italian Air Force, the exercise represents a collective and coordinated effort of resources, personnel and equipment, with the ultimate aim of training crews and rescuers from the many different parts of the SAR (Search and Rescue) “chain”, in order to cooperate synergistically to safeguard human life.

The National Alpine and Speleological Rescue Corps (CNSAS) of Sardinia has been entrusted with the role of directing and coordinating the ground teams, which have been set up with the valuable contribution of personnel from the Army (Alpine Training Centre and Taurinense Alpine Bgt), Air Fusiliers of the Italian Air Force, Alpine Rescue of the Guardia di Finanza (SAGF), Fire Brigade, Civil Protection and Forestry and Environmental Surveillance Corps of the Region of Sardinia.

GRIFONE 2021: How do you intervene promptly in the event of missing military crews?

How can Armed Forces and other State bodies and administrations operate under the coordination of the Rescue Coordination Centre (RCC) of the Aerospace Operations Command (AOC) so that sorties reach and rescue personnel in distress?

How do you maximise the effectiveness of the resources that each administration makes available in the event of a public disaster?

These are all questions that the ‘Grifone’ has trained to answer, each year in a different area of Italy, each year improving shared techniques and procedures.

They flew 100 missions, for a total of about 48 hours of flight time (including “night” flights), helicoptering 65 teams.

The variety of interventions simulated and as similar as possible to real cases was remarkable.

The Decimomannu Air Force Base acted as DOB (Deployed Operating Base), while the “XPTZ” Flying Field in Decimoputzu acted as PBA (Advanced Base Post); the south-western mountainous area of the island, including Mount Linas and the Perd’e Pibera Park area, was designated as the area for the activity.

The PBA (Posto Base Avanzato), prepared by the Logistics Command of the Italian Army, was the “beating heart” of the operations, the result of a considerable organisational and logistical effort by the Armed Forces: with the contribution of all participants, more than 400 units, in just a few days it became a real field heliport suitable for projecting the capabilities of personnel and vehicles as close as possible to the exercise area.

The “Grifone” is an international and inter-departmental exercise planned and conducted annually by the Italian Air Force as part of the international SAR.MED.OCC. (Western Mediterranean SAR).

The aim of the exercise is to develop synergies between the Air Force and other public authorities, and to constantly improve techniques and procedures for carrying out any Search and Rescue mission.

This mission is one of the tasks of the Ministry of Defence, which it pursues, if necessary, also with the contribution of inter-force, inter-ministerial or inter-agency assets.

Eco-anxiety: the effects of climate change on mental health