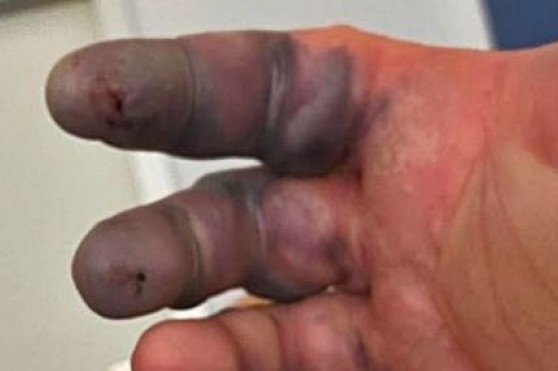 A young British tourist on holiday in Ibiza has learned, alas, at his own expense, that the bite from a violin spider is notoriously dangerous

The young man was sitting on a stool, watching the sunset on the beach in San Antonio, Ibiza, when he was bitten by the spider.

This species of spider does not often develop too many health problems in humans, but its potential venom is dangerous when a necrotic lesion can develop as in the case of this young Briton.

It was only in the early hours of the morning, around 5 a.m., that the British tourist woke up to ‘a strong burning sensation’ and saw his hand very swollen.

It was then that the young man went to hospital, where he was admitted for a fortnight during which time tests were carried out until medical staff diagnosed that it was the bite of a recluse spider.

The advanced state of necrosis caused by the bite, and consequently the impediment of normal blood flow and the loss of life to body tissues, meant that the young man had to wait for the operation that would cause him to lose two fingers on his hand.

Metabolic syndrome linked to an increased risk of stroke recurrence