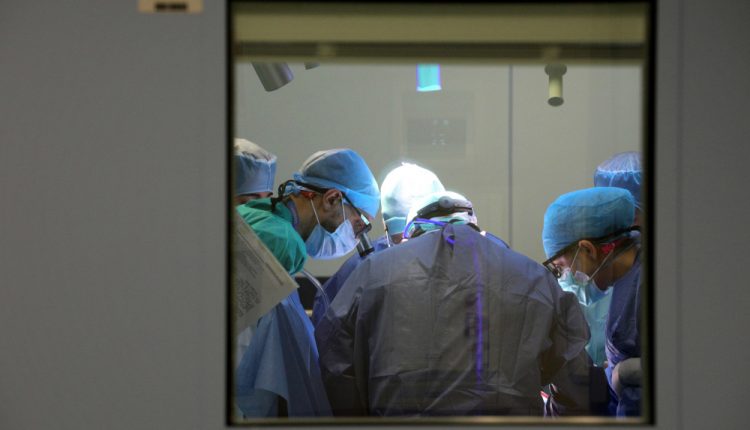 She discovers she has a rare tumour during pregnancy: mother and baby saved by specialists at the Policlinico di Milano

Woman discovers she has a rare tumour during pregnancy: a story with a happy ending at the Policlinico of Milan

From suffering to joy, the unique joy of the birth of a child.

An even greater happiness because it came after the risk of not being able to give birth to her little Nicola.

Halfway through her pregnancy, her mother discovered that she had a rare and potentially lethal tumour, for her and her baby

And yet, thanks to the specialists at the Policlinico di Milano, not only was her tumour removed, but a happy ending was achieved: Laura is now at home, breastfeeding her baby, and the only memory of this tumour are three scars of a few millimetres.

But how was the happy ending possible? It all started in the best time of Laura’s life: because after much effort and several attempts, the pregnancy test finally came back positive.

For the first few months there were no particular problems.

But then something changed.

A pain in her stomach that wouldn’t go away and an increasingly frequent headache had forced her to ask her gynaecologist for help, hoping that these were the normal effects of pregnancy.

But her instincts told her that this was not the case.

In fact, the doctor found her blood pressure to be very high.

Over the next few days, the situation worsened and she had to be admitted to the hospital in her home town in the province of Milan.

Despite initial treatment, however, her condition did not improve and her high blood pressure was beginning to put her baby at risk.

Pregnancy at risk: an ultrasound scan of her abdomen showed a mass above her left kidney, probably a tumour

So it became essential to transfer Laura to the Mangiagalli Clinic at the Policlinico di Milano, a reference point for complex pregnancies.

Here, the collaboration between the specialists of Endocrinology and Pregnancy Pathology allowed us to give an immediate name to that mass: it was a pheochromocytoma of 8 centimetres, a tumour very dangerous for the life of mother and child.

This tumour affects the adrenal gland, which is located above the kidney. The normal function of the adrenal gland is to release hormones that regulate many aspects of the body, including blood pressure, heartbeat and reactions to stress.

With the tumour, however, these hormones went ‘crazy’, which is why Laura’s condition, already six months pregnant, was so complicated.

Pheochromocytoma is a rare tumour, affecting only 7 in 100,000 pregnancies.

For this complex case, the Polyclinic put together a dedicated team of experts who could assess the best course of action in a multidisciplinary way.

Since the pregnancy was already in the second trimester, gynaecologists, endocrinologists, surgeons, cardiologists, anaesthetists and resuscitators were involved, and together they decided to remove the tumour as gently as possible so as not to risk premature birth.

Gynaecologists and specialists in Pregnancy Pathology would also participate in the surgery to remove the tumour, in order to be ready for any necessity

In order to intervene, however, it was essential to stabilise the mother-to-be’s blood pressure first, so the clinicians set up drug therapy to keep it within limits for at least 10 days before the operation.

Our experience in the removal of these tumours,” explains Luigi Boni, Director of General Surgery, who performed the operation together with Elisa Cassinotti, a surgeon in his team, “allowed us to operate through small incisions with a minimally invasive laparoscopic technique: this allowed us not only to protect the pregnancy as much as possible, but also a quicker recovery after the operation”.

The operation was a success: the tumour was completely removed, while the baby continued to rest in its mother’s belly.

At the end of the operation, the woman was able to listen to her baby’s heartbeat live, thus knowing for sure that everything had gone well.

A few days after the operation Laura returned home, and her pregnancy continued without complications.

Then the day finally arrived: at the beginning of the ninth month Nicola was born by Caesarean section.

The tumour is just a bad memory: the little boy is already at home in his mother’s arms, who after so many worries can finally take care of him, confident in a future that only a few months ago seemed impossible.

Ten years ago the Costa Concordia tragedy: the memory of Italian rescuers