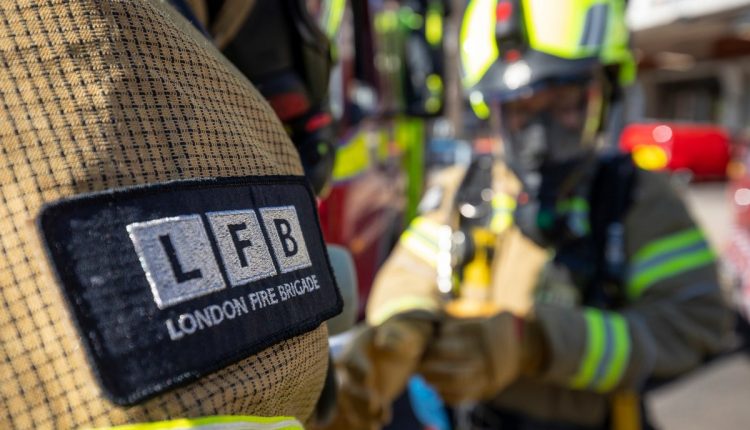 Fire in Dagenham: the blaze in an industrial area rages on, forcing firefighters to make great efforts to contain and extinguish the flames

About 80 firefighters and 12 fire engines rushed to an industrial area in Dagenham this evening, where ‘several industrial units’ and several vehicles are on fire.

The London Fire Brigade (LFB) said it received more than 50 calls about the fire, where several vehicles are also on fire.

Nearby residents have been advised to keep their doors and windows closed to avoid breathing in the heavy smoke while crews work to extinguish the flames.

Fortunately, the night time has prevented the lives of many workers from being put at risk.

The cause of the fire is not yet known.

Dagenham, London Ambulance Service (LAS) is also on the scene, but at the moment no one has sought medical attention

In a statement, the LFB said: “Twelve fire engines and around 80 firefighters were called to a fire at an industrial estate on Kemp Road in Dagenham.

Brigade 999 control officers received more than 50 calls about the fire.

The Brigade was called out at 7.14pm.

Station Commander Paul Green, who is on scene, said: ‘Firefighters are dealing with a significant fire involving several industrial units.

Nearby residents are urged to keep their doors and windows closed while crews work to extinguish the fire, as there is a lot of smoke in the area.”

One person tweeted: ‘Huge explosion and fire at a factory in Kemp Road, Dagenham, just now.

Hopefully no one is inside!”

Teledyne FLIR And Teledyne GFD Together At Interschutz 2022: This Is What Awaits You In Hall 27, Stand H18