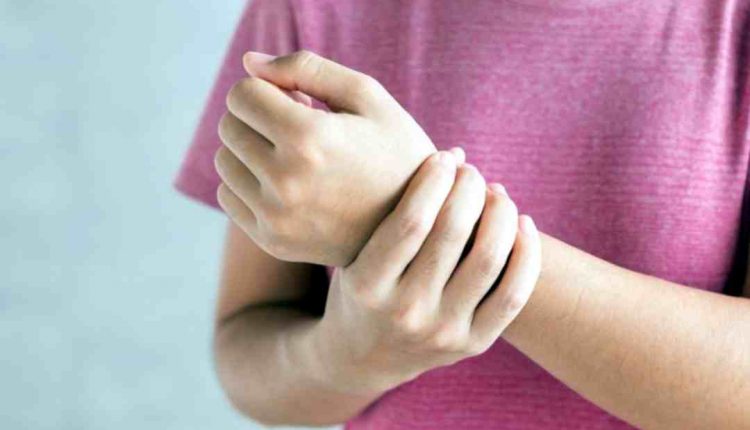 Pain between thumb and wrist: the typical symptom of De Quervain's disease

De Quervain’s disease: a piercing pain between the thumb and wrist which prevents the execution of daily movements such as opening a jar or turning the keys in the lock

This is the characteristic symptom of De Quervain’s disease, a pathology that affects the first finger of the hand: the thumb

Inflammation results in swelling of the tissues around the tendons and a change in volume that prevents the tendons from flowing as they should within the canal that contains them.

Pain is the main symptom of De Quervain’s disease

Intense stabbing pain between the thumb and wrist is the hallmark symptom of De Quervain’s disease.

The pain may have a gradual or sudden onset and in some cases radiate to the forearm; there may also be swelling in the wrist.

Repeated use of the hand – and of the thumb in particular – accentuates the pain, especially in movements requiring rotation of the wrist, such as opening a jar, or when grasping objects such as a bottle or a pot.

This is particularly true for those who make forced or repetitive movements with the wrist, such as: musicians (especially drummers and percussionists); those who embroider and sew a lot; those who assiduously use the computer mouse, keyboard and mobile phone; mothers who breastfeed, especially in the last period when the baby becomes heavy and supporting the head requires a great deal of effort from the tendons affected by this disease.

At the time of De Quervain, the Swiss surgeon who first described this disease, it was known as the disease of nannies and embroiderers.

How is De Quervain’s disease diagnosed?

The diagnosis is clinical and the specialist relies mainly on the description of the symptoms, which are very characteristic.

The pain is associated with the execution of certain hand movements and this helps to differentiate the pain of De Quervain’s disease from the arthritic pain that is typical of awakening.

The Finkelstein test is also useful: the patient is asked to clench his thumb inside the other closed fist fingers and simultaneously bend his wrist in the direction of the little finger.

People with De Quervain’s syndrome find it difficult to move the thumb and bend the wrist due to pain.

In case of doubt, an ultrasound scan may be useful. This allows us to detect any inflammatory changes in the tendons and to observe their relationship to the walls of the canal in which they run.

How is De Quervain’s disease treated?

The treatment aims to eliminate the pain by acting on the inflammation.

Initially, the approach is conservative and may use custom-made braces and anti-inflammatory drugs and treatments such as physical therapies (laser, tecar, shock waves).

Where these therapies fail to produce results, infiltration with corticosteroids with anti-inflammatory action may also be used.

If the conservative approach does not work, surgery is required.

This is a simple operation, carried out on an outpatient basis under local anaesthetic, and lasts about five minutes.

The surgeon makes a small incision in the wrist and opens up the roof of the canal through which the inflamed tendons run to increase the space available to them.

The incision does not require stitches, but a plaster is sufficient.

If the operation is performed correctly, it is conclusive and allows the patient to use his hand immediately without any limitations.

The inflammation resolves definitively within a couple of weeks.

Cuts And Wounds: When To Call An Ambulance Or Go To The Emergency Room?

How To Remove Splinters And Thorns From Leather: Some Information For The Citizen

Cuts and wounds: how to tell if they are infected and how to treat them

Bukholderia mallei infection: what is it and what symptoms characterise it?