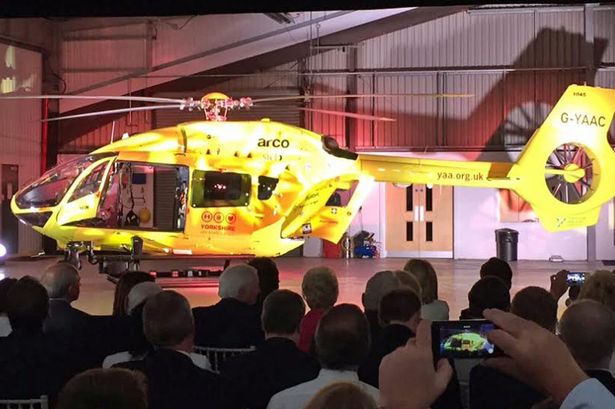 The £6m state-of-the-art Airbus H145 flew into the charity’s Nostell Air Support Unit base near Wakefield to the delight of staff, volunteers and supporters.

Bought to replace one of the two aging existing helicopters, the impressive equipment, which was unveiled by former cricketer Sir Geoffrey Boycott, is set to take to the skies this summer following a full medical fit-out and crew training.

The helicopter, one of two that will be in service by summer 2017, were purchased following several years of fundraising, grant giving and money saving.

It was picked due to being used by military, police and air rescue services throughout the world and is said to have significantly lower operational and maintenance costs as well as being able to fly through the night.

It also has a much larger cabin area to treat patients in flight, and will carry the latest medical equipment.

YAA Chairman Peter Sunderland , of Huddersfield. said: “This really is a landmark day for the charity and for Yorkshire.

“This amazing new helicopter is the result of the hard work and dedication of the tremendous team we have at the charity and the wonderful generosity of the people of Yorkshire.

“This helicopter belongs to the people of Yorkshire and will do for the next 20 to 25 years.

“I am very proud to say we now have a level of service which is probably the best of any air ambulance charity in the UK.”

Humanitarian Airdrops: what you need to know about it