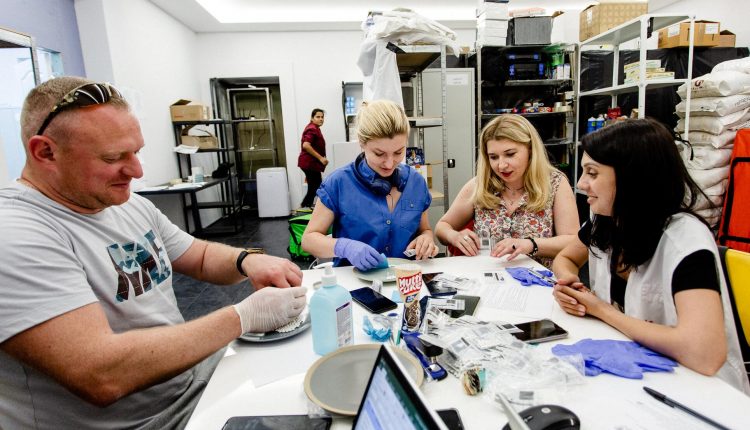 MSF, “Together we can do so much more”: Partnering with local organisations in Kharkiv and throughout Ukraine

MSF: In late February, just as war broke out in Ukraine, Dmitry Zakharov, the owner of a local barbecue restaurant and car wash in Kharkiv, started transforming his businesses in the south of the city into a centre for humanitarian aid

Ukraine, MSF and the Zakharov story

“After I heard the first explosions, I went to the grocery store to get food for my family and I started thinking about what I could do to help,” says Zakharov.

“I saw a long line of people waiting to buy drinking water, but there wasn’t enough available.”

He knew what to do; his restaurant has its own potable water supply, so he started giving it away for free. When a local meat factory damaged in the fighting had to shut down, he gathered up the meat and distributed it to the community while the food was still edible.

Soon, his humanitarian efforts took over his businesses.

The barbecue restaurant’s country-style, knotty wood dining rooms were cleared to provide space for free medical care to anyone who needs it.

Next door, under a large bright sign advertising the car wash, volunteers walk carefully to avoid the water drainage system so they can serve nutritious free lunches daily to the community.

When Médecins Sans Frontières (MSF) teams began assessing the humanitarian needs in Ukraine and how we could address them, a remarkable thing stood out—the number of Ukrainian volunteer networks, non-profit organisations (NGOs), and civil society groups that had swiftly mobilised

They are run by people who were and continue to be directly affected by the war and they are delivering humanitarian aid to the people who need it.
As a result, says Barbara Hessel, MSF’s project coordinator in Kharkiv, “we wanted to help strengthen what they’d already built.”

Up to now, these local groups have provided the vast majority of humanitarian aid in Ukraine.

Zakharov has continued to follow the needs he sees in his community.

These days, when MSF determines that the neighbourhood is safe enough, a doctor and psychologist from the team offer their services at the front of the restaurant while volunteer nurses administer infusions to cancer patients one room over and community volunteers cook meals for around 1,200 people each day in the kitchen in the back.

MSF projects throughout the country are working with dozens of local groups—from volunteers who deliver thousands of food boxes to remote villages, to the railway authorities that provide trains for the organization’s medical evacuation services, to volunteer drivers that deliver medications to patients’ doorsteps.

“These are the right people to deliver aid to their communities,” says Hessel. “They’ve been here and will continue to be here after we are gone, but they do need support.”

Reaching those cut off from aid

Yana Biletskaya started organising humanitarian outreach with some friends as soon as the war began.

Their goal was to reach the people who were completely cut off from other sources of aid—residents of the myriad of villages located far from Kharkiv city.

A massive storehouse inside a train station is filled with donations from organisations large and small—worn brown boxes of canned food sent from a small school in England sit next to a wall of white, well branded boxes from one of the biggest international NGOs.

The group loads donations directly onto trains that head out into the countryside where around 100 different community groups will pick them up and distribute them to residents, many of them elderly.

“We started off with 50 people here in the station,” says Biletskaya, “and now we are 20. But we are also much more efficient than we were at first. We went from working 24 hours every day to putting in fewer hours but better organising our time.

Our problem now is fuel, it’s very difficult for our volunteers to get fuel for distributions.”

MSF has provided thousands of food boxes—one box of non-perishable items feeds a family of three to four for a week—and hygiene kits—with toilet paper, soap, toothpaste, and other essentials—to people throughout Kharkiv city and oblast in partnership with volunteer networks like Biletskaya’s.

Partnering with groups and individuals like this allows us to reach far more people than we otherwise could.

“Together we can do so much more,” says Hessel.

“They have the capacity to deliver 3,000 meals in one day, their networks are so well-organized.”

Ukraine, the groups are also in contact with each other and can tell MSF and other NGOs where there are additional needs

Like many of the volunteers she works with and her Ukrainian MSF colleagues, Daria Samoilova, MSF’s volunteer liaison officer in Kharkiv, was on a very different track before the war upended her life.

When the war started, “I knew everything was changing and it was possible that my life could be destroyed, that I could die.”

Seven days into the war, a large building by her mother’s home was blown up; they packed and left for a different part of the country.

But she had lost her taste for traveling, she says, and wanted to come home.

“I needed to start a new life.”

Samoilova started working with MSF, first as a translator and then in her current role connecting with volunteer groups and overseeing partnerships between local groups and MSF.

After just a few days into this new life, she says, “I had a realisation. I felt happy. I was doing something good and kind, and everyone I was working with had the same idea—to help.”

Even as the war churns on, causing ever more death, displacement, and psychological impact, as well as economic woe, local volunteers and organisations show no sign of slowing down. Zakharov, Biletskaya, and others say they want to do more, not less.

Hessel says as inspiring as this is, it also raises questions.

“Many people no longer have an income—where is the tipping point? How long can this continue? Many work 24-7 and it’s emotionally draining, what they see and experience.”

To help address this, in Kharkiv (Ukraine), MSF has started to support volunteers and community leaders by helping them develop self-care and stress management strategies

“More than anything, though, we want to provide them with continuous support so they can keep helping their peers in need.”

Biological And Chemical Agents In Warfare: Knowing And Recognising Them For Appropriate Health Intervention

ORION Special Vehicles Test Park: the opinions of those who participated (part two)