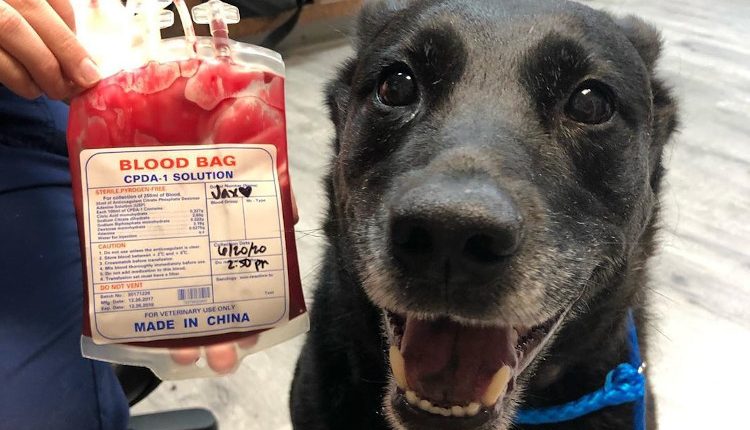 The blood donation of this dog saved the life of an anemic puppy. Jax is now famous all over the world for his heroic action.

Thanks to Jax, a puppy is now alive and he’s going to be ok. The blood donation of this 7-years-old dog opened the door to more awareness of dogs blood donation, which really exists. And we are going to use this article to remember this.

A brief story of love: a dog blood donation to a puppy

The seven-year-old pooch which made this blood donation came just in time, saving a little anemic puppy. He was in near to death because of the lack of almost all his blood cells. He needed a transfusion. Vets affirm that this procedure was urgent and that they were not able to get in contact with the owners of this puppy for almost an hour. However, they decided to carry out the procedure.

As they did not have blood available, employees usually volunteer their own pets, but it is something very uncommon. And this time it was the turn of Jax.

Jax, a crossbreed of a Labrador and a German Sheperd, remained laid down calmly and let the vets took his blood out of him. The most satisfying part was the snacks that Jax got after his donation. Jennifer, the owner of Jax reported on magazines that, that bag of blood was enough for three transfusions. The puppy was so little.

Canine blood donation and others: requirements for a pet to donate blood?

The story of Jax has probably made you think that you probably don’t know how a dog blood donation works (or even a cat blood donation, either). Of course, for any state, there are different associations which take care of this aspect, but the procedure is almost the same worldwide.

The University of Minnesota issued its pets donor program for companion animals in urgent need of blood. They, indeed manage a pets blood bank and allow all veterinaries in the US to access the bank. In particular, they issued the requirements for dogs and cats to allow them being blood donors.

First, like their human counterparts, pets have to be healthy enough to donate. Your dogs and cats will undergo an initial blood screening tests which will identify if your pet could donate, along with a preliminary physical examination. Here is what your pets have to be to become donors:

How does a dog or a cat blood donation collection work?

They perform blood collection with an aseptic technique and with sterile equipment, of course. In cats, they use an open system, while for dogs they often use the closed system. Cats can donate a maximum of only 60 ml of blood, so the single-collection bags are used.

They use the jugular veins for blood collection, which are the best sites for canine or feline blood collection because they are easily accessible, are larger than the other veins, and carry a large volume of blood, which helps minimize RBC trauma during collection.

They place in lateral recumbency the pet donor, during blood collection. The side of the animal used for collection depends on the preference of the person drawing the blood, but it is important to alternate jugular veins with each donation. After the blood collection process is complete, donors should be offered a small meal and plenty of water along with rest.

Will You Bleed for the Throne? HBO and the American Red Cross allies for blood donations

First time ever: successful operation with a single-use endoscope on immunodepressed child