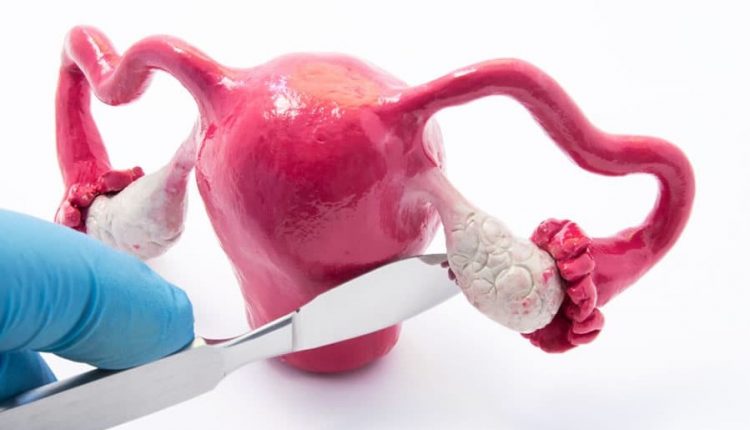 Polycystic ovary syndrome (PCOS): what are the symptoms and how to treat it

It is therefore the most frequent endocrine disorder of reproductive age.

It is one of the main causes of subfertility.

In most cases, PCOS manifests itself after the first menstruation or in adulthood, but some symptoms may occur even before menarche.

The causes of polycystic ovary syndrome

The most important cause of polycystic ovary is hyperandrogenism, a hormonal alteration that occurs when the ovaries are stimulated to produce an excessive amount of male hormones (androgens), particularly testosterone.

This condition can cause problems with the growth and development of follicles, small fluid-filled cysts that contain eggs.

Under normal conditions, when the follicle is mature it ruptures and releases the egg, which heads into the uterine tube to be fertilised.

But in the presence of PCOS, immature follicles clump together to form larger cysts that also have a thicker wall.

This condition prevents the rupture and release of eggs.

Due to the lack of ovulation, menstruation either does not occur or occurs only occasionally, resulting in subfertility.

The excess of male hormones also causes other symptoms: hirsutism and acne.

The causes are still unknown.

As the symptoms tend to run in families, it is assumed, at least in part, that there is a genetic cause that can be traced back to a mutation in one or more genes.

Observational studies point to a complex and varied symptom picture in the generational transition, which suggests that PCOS can be traced back to a combination of factors.

Polycystic ovary: what are the predisposing factors

Factors that increase the risk of polycystic ovary syndrome are

Although multiple ovarian cysts are not necessarily an expression of PCOS, nevertheless more than 80 per cent of women with PSOS have polycystic ovaries.

In the recent past, on ultrasound examination the ovaries had to present at least 12 follicles of 2-9 mm in size, with a characteristic arrangement, predominantly in the cortical part of the ovary, referred to as a rosary crown.

The current improvement in ultrasound technology has instead increased the number of follicles that must be present in the entire ovary to 25 for it to be defined as polycystic.

The numerous follicles increase the size of the ovary up to three times the normal size.

Excess androgenic activity is documented by clinical signs, such as hirsutism, and by laboratory tests.

The most significant laboratory tests in characterising PCOS are:

– an elevated androgenic profile, including testosterone and androstendione. High levels of dehydroepiandrosterone (DHEA-S) are suggestive of adrenal gland dysfunction;

– the LH/FHS ratio (luteinising hormone and FSH hormone), which, measured on the third day of the menstrual cycle, is sometimes two or three times as high;

– the lipid profile, including glycaemia, glycated haemoglobin, insulininemia (altered especially in obese patients with a family history of diabetes or gestational diabetes). More than 40 per cent of PCOS patients have insulin resistance and diabetes.

Menstrual rhythm disorders are linked to the ovary’s difficulty in producing eggs (anaovularity), resulting in amemorrhoea, oligo- or polymenorrhoea.

In adolescent girls, diagnosis can be particularly challenging due to the significant developmental changes typical of the age.

Moreover, many of the typical signs of PCOS, such as acne, menstrual irregularities and hyperinsulinaemia, are common at puberty.

Equally common are menstrual irregularities with anovulatory cycles, due to immaturity of the endocrine system that regulates ovarian function in the two or three years following menarche.

In adolescent girls, multiple ovarian cysts are common and, therefore, ultrasound is not a diagnostic test of first choice in under-17s.

A differential diagnosis must be made with other pathologies presenting endocrine-metabolic disorders involving other glands (thyroid, adrenal, pituitary) and with iatrogenic pathologies (some anti-epileptic drugs, such as valproic acid, can in fact cause PCOS).

In the course of life, the picture with which PCOS presents itself changes. In younger women, the problems consist mainly of menstrual irregularities, hirsutism and acne; in older women, diabetes, miscarriages and hypertension often occur.

The long-term consequences of PCOS, linked to hyperandrogenism, lack of ovulation and insulin resistance, are:

The first measures to be implemented in the treatment of PCOS are increased exercise, a healthy, balanced diet low in refined fats and sugars, and weight loss.

Even small weight decreases of 5-10% have proven capable of correcting anovularity and improving the chances of conception, reducing metabolic abnormalities and consequent diseases (diabetes and cardiovascular diseases).

The treatment of first choice for women who do not wish to have children is the contraceptive pill.

The pill improves acne and hirsutism.

It regulates the rhythm and flow of menstrual cycles by reducing heavy bleeding due to low levels of oestrogen and progesterone.

It can sometimes improve fertility by lowering androgen levels.

There is no elective contraceptive for the treatment of PCOS.

However, some, lacking androgenic activity, are more effective in treating acne and hirsutism.

However, they are teratogenic, so it is advisable to use effective contraceptive methods when taking them.

For instance, oral contraceptives can be used, with which they work synergistically, as they have a central androgenic suppressing action.

Although medical therapies give good results in combating hirsutism, the cosmetic effect may not be adequately effective in eliminating the social discomfort caused by this condition.

Among local treatments, the most effective is Eflornithine, in cream form, which acts on the hair follicles, slowing hair growth. Its action is limited to the period of use.

Electrolysis and laser, although expensive and demanding requiring many sessions, remain the most effective and long-lasting treatments.

PCOS is a major cause of infertility, but it is treatable in the majority of cases.

Before resorting to medication, it is suggested to improve one’s lifestyle.

Clomiphene citrate is the most commonly used drug of first choice for inducing ovulation.

The drug exerts its action on the ovary by stimulating the pituitary gland to produce more gonadotropins (FSH).

Although the action of clomiphene is mediated by the pituitary gland and thus much less stressful for the ovary than a direct administration of gonadotropins, there is still the possibility of multiple pregnancies.

Metformin, an insulin-sensitising drug commonly used to treat diabetes, has been shown to be effective in the treatment of PCOS.

Although there is no indication for its prescription for PCOS, it is increasingly being used off-label for this condition.

However, on its own it does not seem able to increase fertility, whereas its combination with clomiphene has shown greater efficacy in inducing ovulation than their use separately.

The indications for the use of pituitary gonadotropins and in-vitro fertilisation are the same as those used for women without PCOS and with excellent success rates.

Ovarian drilling is a surgical technique that consists of drilling small holes in the ovarian surface with the aid of a LASER or electric scalpel, thus inducing, through the destruction of small amounts of follicular theca, a decrease in androgen production and, thus, ovulation.

The technique has the same efficacy as gonadotropin therapy, but carries the risk of surgical complications (e.g. formation of adhesions).

This limits its use, which is reserved for patients performing laparoscopy for other indications.

Myo-inositol, a naturally occurring sugar found in many plants and animals, is one of the dietary supplements considered effective in restoring normal ovarian activity in cases of PCOS.

Although many studies indicate it to be a good therapeutic aid in the syndrome, definite scientific evidence has not yet been reached, as revealed by a very recent meta-analysis.

Ovarian Cancer, An Interesting Research By The University Of Chicago Medicine: How To Starve Cancer Cells?

Radiotherapy: What It Is Used For And What The Effects Are

Medications for high blood pressure: here are the main categories

How to conduct antihypertensive treatment? An overview of drugs