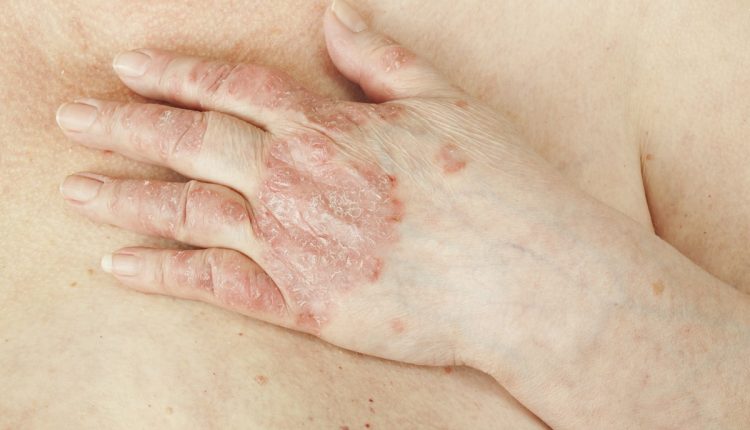 Psoriatic arthritis (PA) is a chronic inflammatory joint disease (characterized by pain, swelling, heat, joint stiffness, and sometimes redness) associated with the presence of skin psoriasis or familiarity with psoriasis, first described in 1818 by a French physician, Jean Lous Alibert

Psoriatic arthritis is a chronic inflammatory rheumatic disease that:

Psoriasis is a skin disease generated by a defect in the immune system and affecting patients with the intermittent appearance of red patches covered with silvery-white scaly plaques in numerous areas of the body, some of which are defined typical sites of psoriatic localization.

The age group with the highest incidence is between 30 and 50 years of age, without significant sex distinction.

In the majority of cases (85%) psoriasis precedes arthritis, in 5-10% of cases the onset is concurrent, and in 5-10% it is arthritis that precedes psoriasis.

The condition is characterized by pain, swelling, heat, and stiffness in the affected joints.

If left untreated, it is a disease that can become disabling because of the significant effects on the quality of life of patients who suffer from it.

Psoriatic arthritis is characterized by numerous clinical signs and a rather complex course, which is why it is increasingly referred to as “psoriatic disease.”

It may evolve progressively, with mild symptoms, or rapidly, in an acute form.

Manifestations can affect joints on one or both sides of the body.

Psoriatic arthritis usually affects hands and/or feet (especially distally, that is, at the ends of the fingers, near the nail), knees, and ankles.

Involvement of the spine (spondylitis) and sacro-iliac joints (unilateral sacro-ilitis) is possible in 5-10% of cases.

Typically, in cases of psoriatic arthritis, there is at least one of the following symptoms:

The impact of psoriatic arthritis on quality of life depends on the joints affected and the severity of the symptomatology in both psoriasis and the joint condition, phases of active disease may alternate with remission phases.

Persistent inflammation can cause damage to the affected joints and, in the most acute forms, can develop into a disabling condition.

Early diagnosis and treatments are important to avoid or at least slow the effects of the disease.

Unfortunately, to date, the causes of psoriatic arthritis are not known with certainty, although some possible triggers have been identified.

It appears that the immune system of genetically predisposed individuals may attack joints and other healthy tissues, leading to the onset of an inflammatory process.

Such aggression would be triggered, or otherwise influenced, by particularly stressful events, such as certain environmental elements (prolonged exposure to sunlight), trauma, surgery, and infection.

As mentioned, psoriatic arthritis is generally associated with psoriasis and related familial predisposition.

Recall how psoriasis is a chronic inflammatory skin disease, neither infectious nor contagious, characterized by abnormal and often incomplete keratinization.

At the level of affected skin areas, there are reddened, demarcated, raised patches covered with silver-colored or opalescent scaling (plaques).

The sites most commonly affected by psoriasis are: elbows, knees, palms, soles of the feet, lumbar region, scalp and nails.

In most cases, this skin disease precedes the onset of psoriatic arthritis; however, the opposite situation (onset of the joint condition at the same time as psoriasis or before it) is less common.

While most patients accuse psoriatic arthritis between the ages of 30 and 50, it is also true that the disease can occur at any age and that its onset is unusual in children.

Men and women are equally affected, although female subjects are more likely to develop it, especially following pregnancy or menopause.

Treatment of psoriatic arthritis should be referred to a specialist, to assess likely interactions with other medications as well as possible side effects.

The ultimate goal of the prescribed therapy should be to provide the patient with a good quality of life by controlling symptoms, preventing joint damage, and normalizing function.

The likelihood of success is unquestionably linked to the timing of diagnosis: the earlier the latter, the better.

Pharmacological treatment of symptomatology is based on the use of :

Psoriatic arthritis therapy has undergone profound changes in recent years with the advent of biotechnology drugs, which have targeted action on specific targets responsible for the inflammatory process and not on the entire immune system like DMARDs.

This drug treatment may be indicated in cases where:

Psoriatic Arthritis: How To Recognize It?

What Is Ankle Arthrosis? Causes, Risk Factors, Diagnosis And Treatment

Unicompartmental Prosthesis: The Answer To Gonarthrosis

Arthrosis Of The Hand: How It Occurs And What To Do

Rheumatic Diseases: The Role Of Total Body MRI In Diagnosis

Canker sores: what they are, symptoms, causes and treatment

Cardiac arrest: what it is, what the symptoms are and how to intervene

What is bronchoscopy and when is it used?

Emetophobia: the fear of vomiting