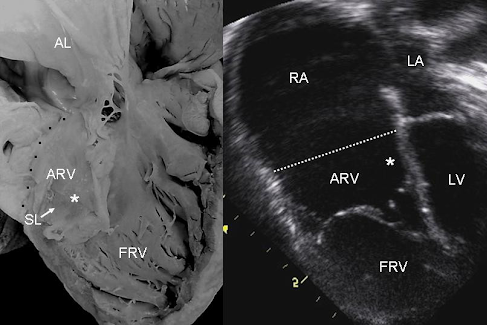 About 30 people are born each year in Italy with Ebstein’s anomaly, which is a malformation of the tricuspid valve

The rarity of the disease and the lack of a satisfactory surgical technique for a long time meant that surgery was postponed as long as possible.

Today, the approach has changed in order to preserve heart fatigue.

Only a few centres in the world are dedicated to studying and treating Ebstein anomaly with an integrated multidisciplinary approach.

First discovered in 1866, the anomaly presents as a downward displacement of the tricuspid valve instead of the usual position between the right atrium and right ventricle.

One of the three valve leaflets, the septal one, instead of being born at the atrioventricular junction, is implanted much lower down, inside the right ventricle.

The other flaps, anterior and posterior, may be somewhat or very malformed.

Those born with Ebstein anomaly suffer from tricuspid valve failure, which does not close properly, and right ventricular malfunction.

Depending on the severity of the malformation, patients suffering from Ebstein anomaly may suffer from

Years ago, surgery was indicated at the onset of the first symptoms, or if the heart was enlarged beyond a certain limit.

Today the approach has changed: the evolution of surgical technique has made it possible to carry out a safe operation with excellent results, favouring immediate intervention at the time of diagnosis, thus avoiding excessive fatigue of the heart.

In the past, many surgical techniques have been devised to repair the valve rather than replace it, but there has never been a unanimously accepted solution.

About 10 years ago, a Brazilian heart surgeon, Dr. J.P. da Silva, invented a new technique which consists of detaching the three valve leaflets and, with that tissue, creating a cone which is then implanted on the reduced ring of the valve, in its natural position.

This technique, called the cone technique, has revolutionised the results of the operation, with a higher level of reliability.

It is a key element in the treatment of the disease, because until then heart surgeons preferred to avoid surgery, at least until patients had a reasonably good quality of life, by postponing it until symptoms worsened.

This meant operating on patients in a worse clinical condition and putting a big question mark over the outcome.

Thanks to the new technique, surgery is proposed more frequently, at any age: from birth, in cases of severe neonatal Ebstein or foetal Ebstein, to adulthood.

High blood pressure: what are the risks of hypertension and when should medication be used?

Bone cysts in children, the first sign may be a 'pathological' fracture