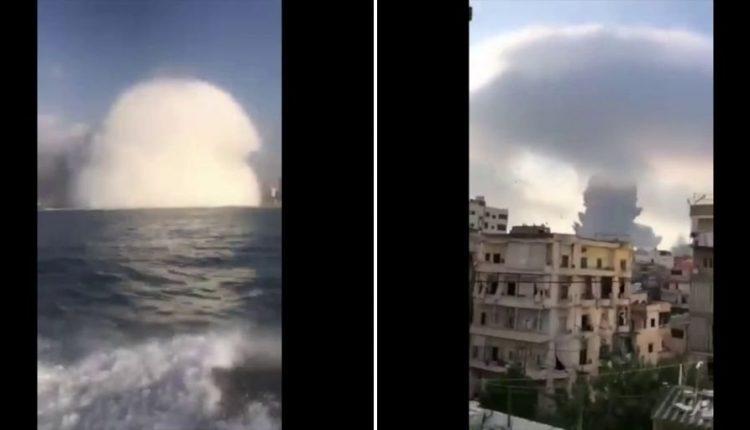 Two explosions shook Beirut. One of the basts allegedly took place near the residence of former Prime Minister Sa’ad Hariri. The death toll is increasing hour by hour.

The death toll reached 78 people, according to the live updates. Causes of the explosions in Beirut are still unknown. Two large explosions were reported in Beirut, the capital of Lebanon, 15 minutes apart from each other. One occurred in the harbour area and the other in the city surroundings. The Health Minister, Hamad Hassan declared more than 2,500 people got injured.

According to the Twitter correspondent of the Emirate newspaper The National, Joyce Karam, one of the two explosions allegedly took place near the residence of former Prime Minister Sa’ad Hariri.

Beirut explosions: “a river of rubble and glass, a disaster”

Terrifying reports arrive from Beirut. Buildings destroyed, rubble everywhere and rivers of glass in the streets.

The authorities speak of hundreds of dead and injured, but we have to wait for the rescuers and firefighters to put everyone in safety.

Terre des Hommes, an NGO which in Lebanon has almost 150 operators throughout the country engaged in educational and child protection programs for Lebanese, Syrian and Palestinian refugees, and has its headquarters in Beirut. One of the operators reports that the windows of their headquarters were blown although it is about 10 kilometers from the site of the explosions.

The Government of Lebanon proclaims a day of national mourning

The Prime Minister of Lebanon, Hassan Diab, has proclaimed for tomorrow a day of national mourning for the victims of the double explosion that occurred in Beirut this afternoon, as reported by the local press.

In the capital, rescuers are still in action to pull people out of the rubble and take away those injured by the two deflagrations that hit the port and a central district of the capital.

Explosions in Beirut: President Aoun calls for the Supreme Council of Defence

The President of Lebanon, Michel Aoun, has called for the Supreme Council of Defence for an urgent meeting tonight to evaluate the double explosion that hit Beirut in the afternoon of Tuesday.

Aoun has allegedly declared that he is “closely following the evolution of the situation” and that he has ordered the security forces to work to respond to the damage caused by the two blasts.

The Head of State has therefore appealed for all possible measures to be taken to treat the injured and provide shelter for displaced persons.

Israel denies rumours: “we had nothing to do with the explosions”

Immediately after the explosion, rumours began to circulate on social networks that assume Israel’s responsibility for the double incident. Israel would have nothing to do with the explosions in the port and centre of Beirut, which caused hundreds of injuries and several deaths and the causes of which are still unknown. This would be said to be anonymous sources of the Tel Aviv government relaunched by various international newspapers, including the Lebanese newspaper ‘The Daily Star’.

LATEST: At least 67 people were killed and more than 3,000 injured in the massive blast in Beirut today, officials said pic.twitter.com/8LvDcU4Mnm

Firefighters and volunteers, the real heroes of the Chernobyl disaster