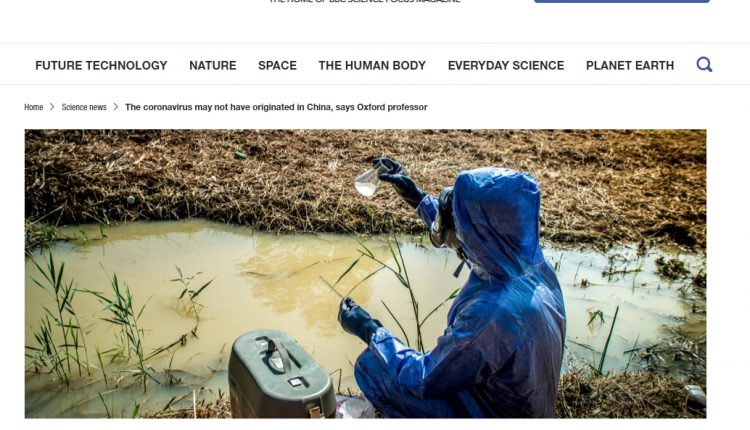 Dr Tom Jefferson, from the University of Oxford, sustains that traces of COVID-19 have been found in many different parts of the world before the outbreak in China.

Dr Tom Jefferson, from the Centre for Evidence-Based Medicine (CEBM) at Oxford University called for an investigation in sewage. It seems that traces of COVID-19 have been found before the outbreak in China.

COVID-19 was not born in China: the theory from Oxford

The coronavirus may have been lying dormant across the world until emerging under favourable conditions. This would explain that COVID-19 was not born in China, as anyone thinks. The Oxford Professor pointed to a string of recent discoveries of the virus’s presence around the world before it emerged in Asia.

They found traces of COVID-19 in sewage samples from Spain, Italy and Brazil which pre-date its discovery in China. A preprint study, which has not been peer-reviewed, claims to have found the presence of SARS-CoV-2 genomes in a Barcelona sewage sample from 12 March 2019.

The intuition of Dr Jefferson: the exclusion of the COVID-19 birth in China

It seems the virus thrives in environments such as food factories and meatpacking plants. Along with CEBM director Professor Carl Heneghan, Dr Jefferson believes this could potentially uncover new transmission routes, such as through the sewerage system or shared lavatory facilities.

In a paper, he declared: “Strange things like this happened with Spanish Flu. In 1918, around 30 per cent of the population of Western Samoa died of Spanish Flu and they hadn’t had any communication with the outside world.” Probably on that date, it is believed that the Spanish Flu arrived on the island after the arrival of a cargo ship in 1918. The same can have happened with COVID-19 in China.

Meatpacking plants are often at 4°C, which is the ideal temperature for the coronavirus to be stabled, for example. It has been found that there is a high concentration of COVID-19 where sewage is 4°C.

Dr Tom Jefferson continues: “The explanation could only be that these agents don’t come or go anywhere. They are always here and something ignites them, maybe human density or environmental conditions, and this is what we should look for.”

There is quite a lot of evidence, according to Professor Jefferson, of huge amounts of the virus in sewage all over the place, and an increasing amount of evidence there is the faecal transmission.

According to the Professor, “These outbreaks need to be investigated properly.”

Is COVID-19 Situation Under Control Everywhere? The WHO Announced 183,000 Cases In A Single Day

COVID-19 In Israel, Emergency Rapid Response Is Made In Italy: The Experience With MP3 Piaggio Motorcycle Ambulance

New Lungs Ventilator To Assist COVID-19 Patients In Many Developing Countries, Another Sign Of The World’s Reply To The Virus