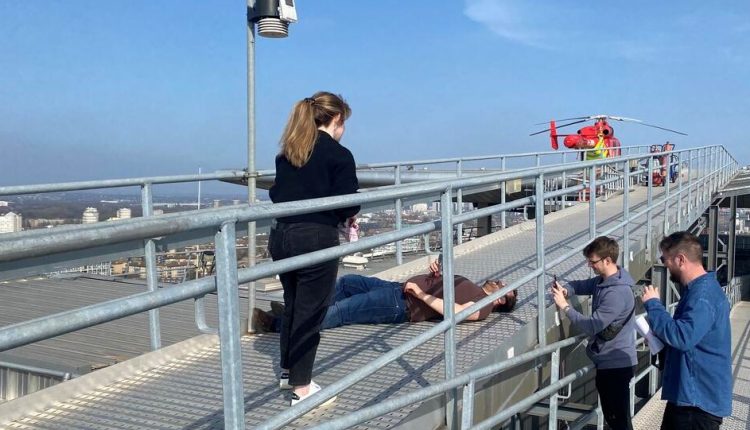 War in Ukraine: a coalition of UK medical charities and senior trauma doctors has released a series of training videos to help civilians save lives in the war in Ukraine

Help for Ukraine: the videos are narrated by Ukrainian TV presenter and activist Timur Miroshnychenko

They have been translated into Ukrainian and Russian and an English version has been narrated by TV presenter and historian, Dan Snow.

The videos, produced by film and production company Objekt, were filmed at our helipad base and show doctors and paramedics demonstrating techniques to treat injuries of the kind that will be currently found on the streets of Ukraine.

Using simple techniques and readily available materials, the videos demonstrate what to do if someone is bleeding from a gunshot or sharp object such as shrapnel, if someone has lost a limb, or sustained a eye burn injury.

There are also videos on how to stop serious bleeding by creating a tourniquet and how to put someone in the recovery position if they are unconscious.

It is hoped that by knowing what to do, citizens will be empowered to provide key pre-hospital care and reduce the number of casualties.

All videos can be downloaded at civilianfirstaid.org and are also available through Civilian First Aid social channels, which you can find below:

Training video for the wounded in Ukraine: the authors’ words

“The charities and doctors involved in this partnership are changing the way first aid training is delivered in conflicts.

As we’re seeing in Ukraine, civilians are on the frontline, and this format means people without prior training will be able to equip themselves with simple life-saving skills.

By harnessing the immediacy and shareability of social media, we hope this information will reach the greatest number of people and save lives.

These videos can be stored, shared and used as a resource at the point of care, which understandably is something traditional first aid teaching cannot achieve”.

Doctors Simon Jackson, Nick Rhead and Tom Kirschen, who came up with the idea and organised its grassroots

Ukraine Emergency, Another Cargo Ship From The United Arab Emirates With Humanitarian Aid And Ambulances

Transcranial Doppler: what it is and why it is performed

Russia, a life for rescue: the story of Sergey Shutov, ambulance anaesthetist and…