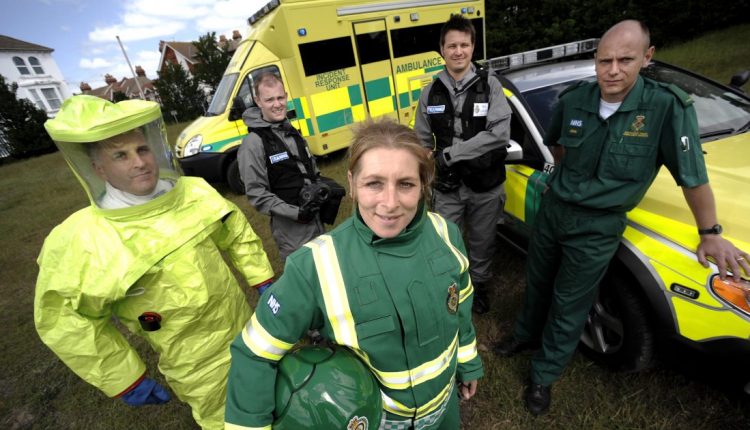 Some interventions are not standard. Discover the HART ambulance paramedic programme and professionals for terroristic attacks and CBRN scenarios.

In 2004 the Ambulance Service Association (ASA) and the Department of Health, asked the ASA Civil Contingencies Committee to start a research of personnel. Their project was to find inside ambulance personnel (EMT, paramedic, and doctor) other emergency professionals able to work within the “hot zone” of a major hazardous incident. Let us see the HART paramedic ambulance programme.

Traditionally, the Ambulance Service had always operated within the ‘cold zone’, areas where contamination was not present and the zone was deemed to be a safe working environment. Various incidents in recent years, alongside the increasing threat of CBRN emergencies, resulted in ambulance staff being trained and equipped to work within a ‘warm-zone’ environment. The reason is that paramedics can provide decontamination to casualties and emergency services workers under medical supervision earlier.

In January 2005, experts in ambulance services and specialists in the CBRN field acknowledged that not being able to operate in the hot zone of a major incident meant “casualties”. If the ambulance service is not able to undertake the clinical interventions necessary to preserve life at the early stages of a CBRN/HAZMAT incident, people could die. Staying out of the hot zone means you cannot bring a stretcher to the patients who are not able to walk. That can reduce the survival rate. The ASA commission starts to create crews able to jump off the ambulance in a hot zone without lack of equipment or preparation.

Subsequent experience from the terrorist bombings in London on 7th July 2005 proved that being able to work in the centre of these scenes when there was no contamination present, meant that many lives were saved that would otherwise have been lost.

As a result, the decision was taken to explore the possibility of being able to train and equip personnel who would be able to work safely in such environments even when there are contaminants or other serious hazards present (whether caused deliberately or accidentally). This resulted in the beginnings of the HART programme.

The Fire Service later approached the Department of Health with a request to consider training paramedics to work in the Urban Search and Rescue (USAR) environment, alongside their personnel. The decision was subsequently made, during 2006, to add a USAR capability to the HART project.

Within the HART programme there are currently two components:

In the time it is anticipated that other specialist roles, such as the Maritime Incident Response Group (MIRG), which has resulted from the ‘Sea of Change’ project, will also be incorporated into HART.

HART-IRU is being evaluated within London Ambulance Service, and HART-USAR is being assessed in Yorkshire Ambulance Service. The plan is to establish additional HART units in the North West and the West Midlands in the first phase of the roll-out across England, with others to follow soon after.