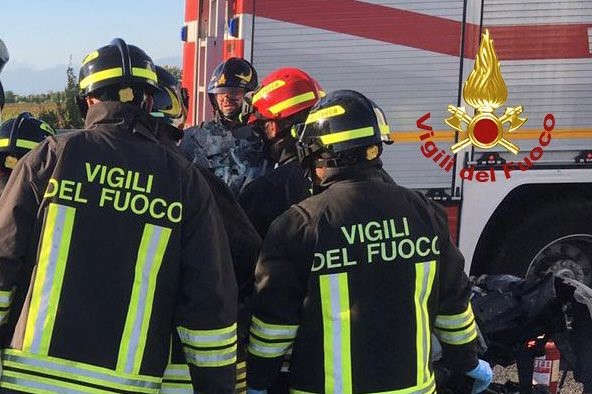 The USB union firefighters: ‘No prevention on the ground. Only promises on talk shows”

In the still agitated hours of the search for the victims in Casamicciola and the dead being counted in the Ischia tragedy, there is a denunciation that sounds like a bitter indictment of politics, all parties and governments of all colours.

“A WAR BULLETIN AND NO PREVENTION PLAN”

The USB National Council of Fire Brigades takes pen and paper and writes: “Yet another tragedy announced, the umpteenth, empty words come to us from the TV screens, the usual useless promises, sterile polemics in the talk shows where the sad theatrics of our inefficient political machine are staged.

No government, since the post-war period, has been able to develop a serious plan for the rehabilitation of the Italian territory from the hydrogeological point of view, despite the fact that since 1950 almost 6,000 lives have been lost due to landslides, floods and avalanches.

Not to mention the injured, thousands of them, the material damage: at least 60 billion euro, war bulletin data, a war we are losing with the territory’.

THE USB FIREMEN’S UNION: ‘THE PRIORITY IS THE TERRITORY, NOT RAVES AND IMMIGRANTS’

The fire brigade emphasises: ‘These are not ‘natural’ disasters, there is nothing natural about them, it is the abandonment of the territory, cementification, building abuse that causes landslides, floods.

Eighty per cent of Italian municipalities have at least one area at hydrogeological risk, a serious country would put the problem of land disruption at the centre of public debate, not raves or immigrants.

They try to manage emergencies and talk about reconstruction, not serious prevention.

It is clear that prevention is not a business for those who get rich on tragedies, those who in jargon we call the ‘palazzinari’, the serial cement builders: speculators, rapists of the territory’.

“PREVENTION DOES NOT BRING CONSENSUS, BETTER THE BRIDGE OVER THE STRAIT”

The firemen’s union Usb rejoices: ‘Prevention does not bring electoral consensus, it is not a front-page topic, it does not give billions to a few companies, as with the great TAV-style works.

Yes, the great works, how much our politicians like them, the ‘bridge over the Straits’ comes up at every election round, it seems more like a threat than a promise.

Dredging a river, rebuilding an embankment, terracing a hill, tying up an area by depriving it of cement does not bring votes, on the contrary, it takes away important support.

This is a way to minimise waste, to ward off the mafias, who have little margin on small projects, to enhance the value of local businesses, incentivising innovation, to reduce the abandonment of often depressed areas, enhancing the landscape and safeguarding the lives and assets of all’.

THE FIRE BRIGADE OF THE USB UNION: “WITH 2 BILLION IN THE BUDGET IN 20 YEARS WE WOULD HAVE AVOIDED THE ISCHIA TRAGEDY”.

The firemen’s basic union emphasises that ‘securing the Italian territory from the hydrogeological point of view would cost us about 40 billion euro, while 2 billion per year would have been enough over twenty years (from 2002 to today) to secure the entire national territory.

The landscape aspect is not to be neglected and unfortunately is not taken into due consideration when calculating the damage, but in a country like ours with a high tourist vocation, the loss of beauty is devastating’.

“TOO MUCH BUREAUCRACY, CIVIL PROTECTION MUST BE RETHOUGHT’

Lastly, there is an acknowledgement of the cumbersome nature of Italy’s administrative machine: ‘Another critical issue is too much bureaucracy and complicated procedures for participating in both national and European calls for tenders, even when there would be money for concrete projects, which could help reduce damage to the territory, it is often not accessed due to a lack of projects or inability to manage procedures’.

Lastly, ‘there is the aspect of the rescue machine that sees us as ‘firefighters’.

We, as USB, have a project of radical reform, for years we have been asking for the classification of the Fire Brigade under the Presidency of the Council of Ministers, outside the Ministry of the Interior.

The idea is to finally place the fire brigade at the centre of a modern Civil Protection device with capital P and C, we are aware that we are asking for an effort of imagination from politicians and workers, but a different vision of the future of the fire brigade is necessary.

Having chased the smoke sellers who deluded the workers with bogus equations and bogus compartments, we have been led to the public sector, with loss of rights and few economic benefits, except for managers and prefects who have increased their power. USB will continue in this challenge of creating a new Civil Protection”.

Cloudburst In Ischia: Fire Brigade Working To Rescue The Population