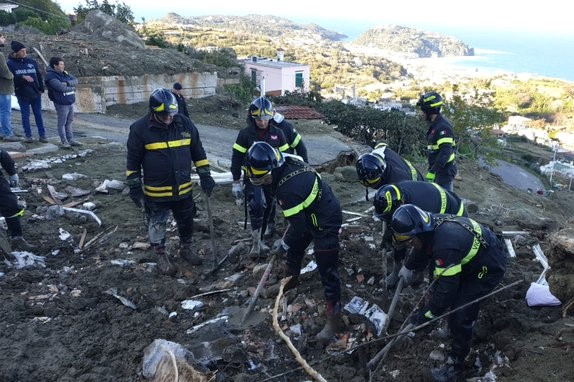 Since 5am on the morning of 26 November, a violent cloudburst hit the island of Ischia (NA), causing flooding and mudslides

In Casamicciola, a landslide engulfed a house, and searches are under way for any missing persons, while a car was dragged into the sea with the two occupants being rescued.

Floods and landslides on Ischia: teams and divers sent for reinforcement from Naples

Operations continue on Ischia to rescue the population and search for missing persons.

160 firefighters are operating on the island with 70 vehicles from Campania, Lazio, Tuscany, Abruzzo, Apulia and Molise.

The National Corps’ teams are stationed in the Casamicciola area: experts in topography applied to rescue, USAR (Usar Search And Rescue), SAF (Speleo Alpino Fluviali), dog handlers and SAPR (Sistemi Aeromobili a Pilotaggio Remoto – remotely piloted aircraft systems) operators are at work in the upper part of Via Celario for search operations.

Divers from Tuscany are working with sonar to sound the seabed in the stretch of sea near the port.

Work continues unceasingly to search for the missing and assist the population.

The number of victims of the landslide in Ischia has risen to eight. Four are still missing

With five victims identified by the fire brigade in Casamicciola, the search continues for rescuers after the mudslide that swept through entire houses and caused considerable damage in Casamicciola on Saturday morning

Firefighters have found the lifeless body of a missing person in Via Celario in Casamicciola, a municipality on the island of Ischia swept away by a landslide two days ago.

Delicate operations are underway to recover the body.

Four people remain missing in the mudslide that swept away entire houses.

Given the delicacy of the subject, we are consciously delaying counting the victims, awaiting the official figure of ascertained deaths.

First to be recovered was the body of Eleonora Sirabella, the 31-year-old first official victim of the tragedy that struck the island community.

Eleonora was with her husband when the fury of the landslide swept through the house: still no trace of him. The seventh body found yesterday was that of another woman, Nikolinca Gancheva Blagova, a 58-year-old Bulgarian national.

During yesterday’s search, the bodies of two siblings, Francesco and Maria Teresa Monti, aged eleven and six respectively, were found.

Of the Monti family, the father, mother and another son are still missing.

Also missing are the members of another family, the one consisting of Maurizio Scotto Di Minico, 32, Giovanna Mazzella, 30 on 11 November, and their son GiovanGiuseppe, born on 4 November this year: 22 days old when he was swept away by the landslide.

The three were at the home of Giovanna’s mother, who managed to escape by climbing out of a window.

The woman, who is not giving up, is among those staying at the hotel.

The Monti family and little GiovanGiuseppe’s family lived in two buildings next to each other.