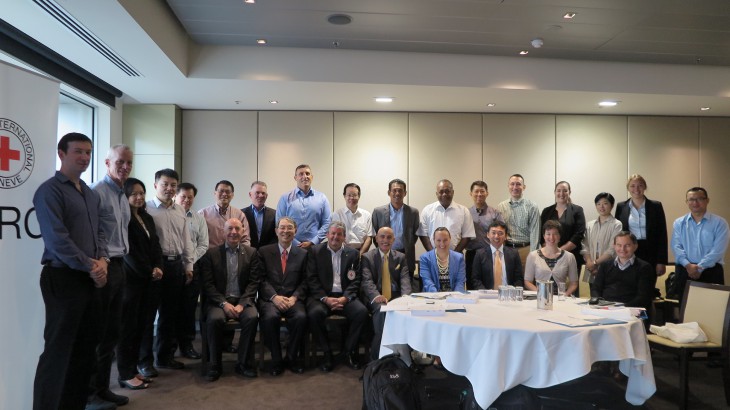 Military lawyers from Asia and the Pacific recently attended a Regional Military Lawyers’ Operational Law Course, conducted by the ICRC in partnership with the Asia Pacific Centre for Military Law at Melbourne Law School

The course attracted 19 participants from 11 countries, providing them with a baseline level of military expertise in International Humanitarian Law (IHL) and other international law applicable to the conduct of military operations. Topics included: the use of force in international law, legal classifications of situations of violence, detention, means and methods of warfare, peace keeping operations, investigations, emerging technologies, naval and air warfare, rules of engagement and command responsibility. Presentations were given by regional military legal officers as well as faculty members from Melbourne University and Australia National Law Schools and Professor Song from Korea –the former President of the International Criminal Court.

The course was a unique opportunity to reinforce respect for IHL by armed forces and States in the region. Kirby Abbott, the ICRC’s delegate to the Armed Forces and Security Forces for South East Asia and the Pacific noted that “military lawyers play a key role in advising military commanders during the planning and execution of military operations. By enhancing their expertise we enhance the ability for military operations to be conducted lawfully”. Generating respect for the law and the lawful conduct of military operations is essential in alleviating the suffering of civilians and preventing violations of IHL in times of conflict.

A strengthened understanding of the international laws that govern military operations also gives States the ability to adhere to the standard operating procedures used in bilateral and multinational operations and exercises. As participant Zahari Mohd Ariffin, Legal Officer with the Malaysian Army explained “this way we can have some uniformity among us when we conduct operations together during armed conflict, or when we send our troops to do peacekeeping missions”.

Participants had the opportunity to learn about the latest developments in international law relevant to both States conducting hostilities and also those not experiencing armed conflict. Even during peacetime, regional militaries are sometimes called to respond to outbreaks of violence and it is therefore crucial that armed forces are equipped with knowledge of how international legal frameworks apply in their countries.

“All the information I’ve learned here at this course will allow me to understand how these international laws relate to us in Fiji,” said Lt Col Juinaosara, from the Fiji Army. “If we look at the last 16 years, from 2000 until now, the Fiji Army has been involved in a lot of domestic operations. Fiji is also participating in a lot of overseas missions for peacekeeping, so it’s important that we have a good grasp of these laws, for the sake of humanity.”

In addition to fostering a common understanding of IHL and related international legal regimes amongst military lawyers within Asia and the Pacific, the course provided an opportunity for participants to exchange perspectives and experiences with each other. Military lawyers completing the course developed contacts and networks with other counterparts and with the ICRC. These professional relationships are a step toward building a community of military IHL lawyers in the Asia-Pacific and will benefit each participant during future operations and exercises, where they can apply the skills developed during the course in practice.

A successful CPR Saves on a Patient with Refractory Ventricular Fibrillation