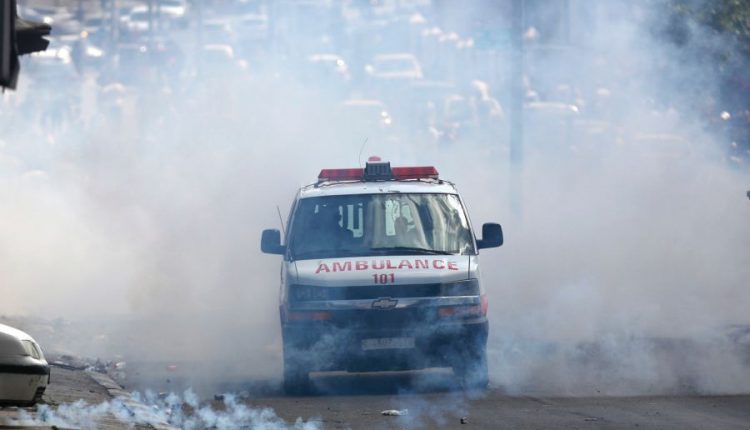 When you are in a risky situation, and worst of all, in a war zone each movement and action become vital for both you and your patient. What about air ambulance service unavailable in a risky situation? We collected the testimony of a health Nurse/EMT who worked in Baghdad Iraq in a British company who is handling the Baghdad international airport.

The #AMBULANCE! community started in 2016 analyzing some cases. This is a #Crimefriday story to learn better how to save your body, your team and your ambulance from a “bad day in the office”! The witness we mentioned above worked for a company which catered to both local and military flights all over Iraq. He experienced unexpected unavailability of air ambulance in a risky situation in a war zone happened in April 2016. In this article we will analyze his story.

Working in Iraq as a foreign from western places especially who are inside the green zone, (safe controlled area) are not allowed to go outside the green Zone, (inside safe facilities). That’s why there are standby medics and a private clinic that has ALS standard and equipment in pre-hospital transfer in case of emergencies. However, there is no hospital inside the Baghdad international airport, that’s why we have ISOS in case of real emergency to transfer patients to the nearest hospital E.g Dubai, Kuwait, Basra.
Below the incident respond SOP.

In this kind of place, safety is the rule of thumb in our organization. We have networks in security companies that sending us the previous assessment in such location and sending the report daily, weekly, monthly and if there is a risk assessment we are receiving the report in the situation as soon as possible 24/7 example, if you have time to look at the report attached by Intelligence security group.

I was called by one of the managers seeking medical help for a guy who is complaining of a severe headache and numbness. That was on April 2016, on 3 pm, this male patient is 62 years old with a history of 4 heart bypass last year October 2015 with Type 2 DM insulin dependent person with sedentary lifestyle and over-consumption of alcohol.

I saw him at the clinic at 3:20 pm with chief complaint of severe headache numbness of the left extremities, and blurring of vision on his left eye, following or protocol to take measures with the vital signs and assessment V/S shows BP 215/145mmhg temp: normal SPO2: 87percent saturation and heart rate is 110 bpm. Calling my attention that this guy is suffering from stroke.

As health care providers, we are following protocols or standing orders in case of life-threatening emergencies, so I did follow all the protocol and keep the patient saturation above 90 percent by o2 therapy and transfer as soon as possible.

I directly inform our consultant which is in Basrah Iraq that time so I am carrying order by a phone call and arrange for the ISOS/air ambulance for emergency medical evacuation as soon as possible to save this patient life or to minimize the risk of being paraplegic or worst.

Following all the chain of command to transfer via ISOS or air ambulance, what a place on earth that there is no any available flight that can be on time and the availability is 3 am of the next day. Because air ambulance like ISOS charter flights are private companies if in case that need emergency evacuation, we need to contact the nearest ISOS in the area for the evacuation and it will take minimum of 1 hour and as soon as possible after notified.

So I know that I am in a situation that I need to decide outside the box. Calling the management and the security managers that this patient is in a risky situation and we need to send him in downtown Baghdad in the nearest hospital to be admitted in emergency/ICU facility as soon as possible, although we are not allowed to go outside the green zone.

The case: part 2 – Baghdad airport and air ambulance availability in riscky a situation

Time 15:00 – We are escorted by the PSD or the private security convoys to go downtown Bagdad, while on the road the patient still on the same condition conscious and coherent and I am hoping that there is a facility in the hospital and this is my first time going outside the green zone, (Uncontrolled Risky Place).
We arrived in the Hospital and according to the local Iraqi security that that is a good hospital, I talk with the doctor about what happens and the condition of the patient and my primary DX. Assessment, they took blood samples like RBS, ECG, and stroke assessment, and after that we ended up no any CT /MRI scan and there is no any observation cases to be admitted in the said hospital especially for foreigners because that place is too risky and no any foreigners being admitted or treated in that hospital (they are preventing abduction).

So it means that according to the GP local Iraqui doctor that his diagnosis is not stroke but severe hypertension that may lead to stroke, that’s why he gave S/L antihypertensive medicine and let us go back again, in my understanding I am on the worst condition that I will have in my career, if there is something wrong happen, I inform our on-call doctor and I decided to bring back the patient at the camp and put him in the clinic for observation hoping that he will not get worst until we will have the air ambulance, for security reasons we return into our camp, checking all his vital signs every hour, I know that when his blood pressure will be uncontrolled I need to do it on my own with a doctor on the other side of the phone. I keep on praying hopefully he stabilized.

The case: part 3 – Baghdad airport and air ambulance availability in riscky a situation

Time 20:00 – Monitoring his V/S shows that his BP is fluctuating and it reach already 250/130mmgh, saturation 87, Pr: 122bpm knowing that the air ambulance will be reaching at 3 am, so our consultant and me decided to hook him in nitroglycerin incorporated to normal saline in 40mgtts/min and monitor vitals as I connect him already in cardiac monitor, hoping that he will not have any cardiac overload as we are infusing nitroglycerin to lower down his BP to prevent any hemorrhage from the brain. That can cause him paraplegia of worst.

Monitoring him in more than 5 hours with a patient who is too risky to have ischemia and for my profession, knowing that there is no doctor around and I am receiving orders via phone call, is not acceptable in the protocol. I know that if there is something wrong I will be in big trouble that I can lose my license and everything that I have by doing things in a win-win situation that you need to do it, because you don’t have a choice just to save this guy’s life. I am not in a proper place to do infusion at the clinic without a doctor beside me knowing that his past medical history, He just has his heart failure and have his 4th bypass a year ago.

Time 02:30 – Luckily, the patient blood pressure stabilized and he is still conscious but still complaining of a severe headache, (pain scale of 5/5). Until the air ambulance (ISOS) came at 3:30 am and transfer him to Dubai American hospital.

Following up his condition because I am too worried about what happen he is Admitted and direct to ICU, MRI,  CT scan done showing that there is a part of the brain mildly damage as he has ischemic stroke attack and if his blood pressure where not controlled according to his doctor he can suffer from brain damage because of bleeding hemorrhage. Resulting from paraplegia if his blood pressure is not controlled at that moment.

After the situation happens, the organization schedule a tabletop exercise about the incident. As a member of the incident response team and the situation is a medical evacuation and things been escalated, as a health care professional provider we care about life and we know that you really need to do something and not to sit and wait for something. that’s why I decided to escalate the situation and bring the person downtown Baghdad.
The preventive measure that we change is the company get access to the military based hospital for western people in case of emergency after the incident happen.

And if it will happen again in the future that you need to escalate the situation, I will not think twice to do it again as long as you can save someone’s life.

Doing something well and receiving a simple thank you from what you have done is a very heartwarming for all who are on the same field as us.

OTHER ARTICLES OF THE COLUMN

REMOTE congress: will medicine be part of air ambulance technology to improve lifesaving missions with helicopters?

MRSA infection on ambulances? Maybe it's a matter of disinfection before the refilling process.