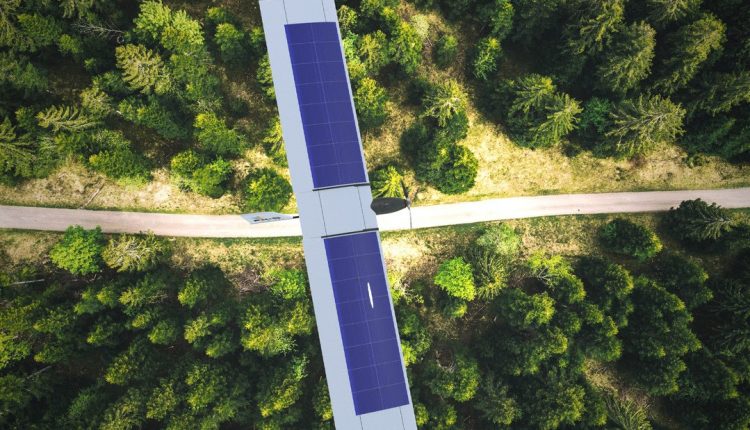 Non-polluting and silent, “Firehound Zero” can fly for over 8 hours even over nature parks and protected areas

Called ‘FireHound Zero’, it is shaped like a small aeroplane and, thanks to the photovoltaic cells on its wings, can fly autonomously during the day for more than eight hours non-stop.

It can monitor areas of around 500 hectares per hour with a sophisticated infrared sensor, providing the control centre with the precise coordinates of even small-scale fires (as small as 30-40 centimetres in diameter, like a campfire) before the fire breaks out and causes irreparable damage.

In 2021, according to data from the European platform Effis, more than 1,500 square kilometres of woods and forests throughout Italy went up in smoke, often in large fires that could have been effectively contained had they been detected in time.

A fleet of these small drones, therefore, could ensure the continuous coverage of large areas of land at risk, providing rapid and precise warning in the event of accidental outbreaks or even the actions of arsonists, and facilitating the timely intervention of the fire-fighting forces.

The ‘FireHound Zero’ drone (which literally means ‘fire hound’ and is also called ‘FH-0’) was developed by two Italian hi-tech companies: NPC of Imola (Bologna), which specialises in the engineering sector and in the production of microsatellites for scientific and commercial use, and Vector Robotics of Mogliano Veneto (Treviso), which specialises in the design and production of innovative solar-powered drones for use in space exploration missions.

It has a length of just 87 centimetres and a wingspan of 2 metres, weighs 1.5 kilograms and has around 0.5 square metres of photovoltaic cells on its wings, which recharge a battery and supply energy to the electric motor.

It flies at an operational altitude of 120 metres and a speed of about 40 kilometres per hour.

It is equipped with a sophisticated thermal imaging camera in the infrared band, manufactured by the American company Teledyne FLIR, capable of detecting fires thanks to the temperature of the flames.

It can be easily launched by hand by an operator and, at the end of its mission, lands at a predetermined point.

The drone has a range of 10 kilometres, which can be extended, with 4G/5G technology already installed on board, to several hundred kilometres.

It can also fly over nature parks and protected areas, thanks to its solar-powered electric motor that makes it absolutely non-polluting and silent.

“We believe we have found one of the noblest uses for a drone, which will soon be of great help in detecting and preventing fires and avoiding the destruction of hundreds of hectares of woods and forests every year,” says Andrea Beggio, project manager for the system’s development at Vector Robotics and Italy’s leading expert on solar-powered drones.

“We are currently in talks with a number of national institutions and local administrations that would like to use fleets of ‘FireHound Zero’ drones to continuously monitor from the sky the areas at risk of fires in their territories and provide rapid and precise information for the timely intervention of ground and airborne fire-fighting forces.

The ‘zero’ in the name of our drone is intended as a wish: to reduce to zero the number of fires that break out without being detected and contained in time.

Teledyne FLIR And Teledyne GFD Together At Interschutz 2022: This Is What Awaits You In Hall 27, Stand H18