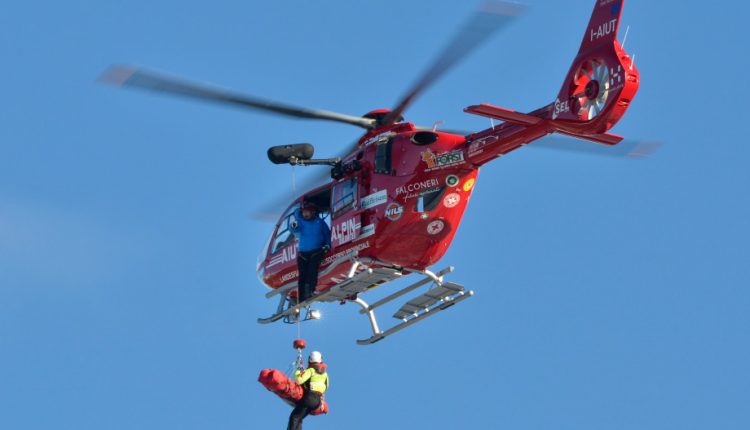 Two Spanish mountaineers have refused the aid of Alpine Rescue helicopter service twice. They will pay an invoice of 120 euros per minute of flight, without a ceiling.

The Spanish couple rescued in the Alps of Belluno will have to pay the full price of the HEMS intervention. The 3 missions were activated by the mother of the unprovided mountaineers. Twice, they refused to be brought ashore by the helicopter of the Alpine Rescue. What happens in these cases? You pay very expensively.

What happened on the West Pike of Lavaredo?

Sunday, September 1st, a couple of Spanish tourists, without any pathology, start to climb the Cima Ovest. They arrive at an altitude of 2,750 metres, 80 meters under the top. They were not able to finish the climb so that an emergency call start. The mother of a climber, not seeing the couple arrive in time at the refuge Auronzo, call for the rescue. Reaching in the afternoon from the HEMS helicopter H145 of Belluno, the couple refused the relief. They thought they were able to face the last “pitches” to get out of the way. After spending a night on the wall, the two mountaineers called the Alpine Rescue for information on how to overcome the critical point. It happened on Monday morning. The mountain rescue team gave the info and monitored the situation, warning that the weather would get worse. In the afternoon, the second attempt of recovery happened. It is not very clear who asked for it (it seems once again the mother), but the couple refused still, and communications were interrupted.

Alpine Rescue – When a rescuer has to decide about your life

The CNSAS Alpine Rescue then took control of the situation ordering the evacuation from the wall because of the adverse weather conditions that were about to occur. In this situation, the Mountain Rescue team acted with explicit knowledge of the situation. Finally, the mountaineers were evacuated by the Aiut Alpine HEMS. They were no longer able to make the two (very demanding) pitches of the climb. Now they have to pay for 3 helicopter rescue attempt.

Who pays for the Alpine Rescue and helicopter flights?

The Veneto Region, in case of interventions with no health complains, has decided to apply a penalty rate. Climbing a tricky rock face, without the necessary skills or technical equipment, costs – in this case – 7,500 euros fine. Attention: it is not a rate that applies to everyone. Those who are sick, or have health conditions that risk becoming critical, are not sanctioned. The patient’s state is always determined by a doctor from 118 Veneto.

For three flights you could exceed 10,000 euros fare

When a rescue helicopter is activated for an operation involving the recovery of unharmed persons who are unable to continue due to technical deficiencies, the SUEM118 Helicopter base will issue an invoice:

For the foreign tourist, however, the ceiling does not exist, and the helicopter comes to cost 120 euros per minute. Between flight times, hoovering and return, three flights of at least 30 minutes each can cost well over 10,000 euros.
A figure that will surely remain imprinted in the minds – and in the pockets – of the unprovided mountaineers.
It’s right: they have put at risk their lives and the HEMS crews too, who have tried to save them.

REMOTE congress: will medicine be part of air ambulance technology to improve lifesaving missions with helicopters?

Earthquakes and ruins: How does an USAR rescuer operates? – Brief interview to Nicola Bortoli

Hurricane Dorian: shelter and clean water priorities in the Bahamas

Ambulance Museum in Denmark - Brief guide for tourists and professionals