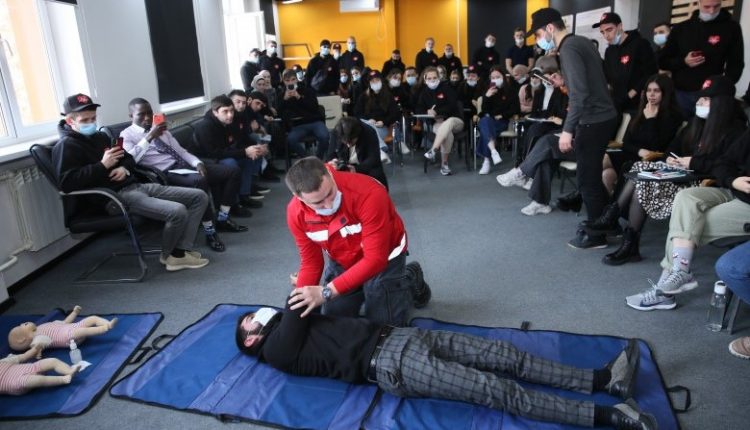 In total, 34 master classes were held on Friday across the country in 30 regions of Russia.

Immediately after the start of the All-Russian programme, the first master class for 40 students of the First Moscow State Medical University named after I.M. Sechenov was held.

Its participants became familiar with the basic principles of first aid, learned algorithms of actions and rules of behaviour in various situations.

“Masterclasses in schools, universities and camps will help children and teenagers become more aware of life and health risks and provide them with the knowledge to protect themselves and those around them.

In the training programme, we have focused on developing skills that will enable children to provide immediate assistance to victims before medical personnel arrive,” said Victoria Makarchuk , First Vice President of the Russian Red Cross.

The instructors and their assistants gave participants a visual demonstration of what to do in certain cases, and answered participants’ questions.

In addition, the students were able to consolidate their knowledge on dummies and other listeners.

“As doctors, we understand the importance of first aid skills.

Knowledge of first aid algorithms, the ability to stop bleeding, perform chest compressions or artificial respiration in an emergency can save someone’s life.

It is also very important that Russian Red Cross training courses take place in the form of practical exercises, with drills on dummies, and not just in theory.

I am sure that this will help some of the youngsters to remove the fear of approaching the injured person”, said the head of the department of life safety and disaster medicine, advisor to the PMSMU administration. THEY. Sechenov Ivan Chizh .

First aid instructions from the RKK, here are which areas of Russia will be affected:

RKK: in the Leningrad region five events were held simultaneously on the basis of universities and schools

Students of Gymnasium No. 2 in Tosno, School No. 8 in Volkhov, School No. 6 in Vsevolozhsk, School No. 1 in Sosnovy Bor and students of the Gatchina Institute of Economics, Finance, Law and Technology participated in the master classes.

The programme of the training masterclasses included a detailed analysis of the provision of first aid to victims in various unforeseen situations.

This year, the All-Russian RKK programme will be implemented from 1 April to 31 December 2022.

Now 30 regional branches of the Russian Red Cross are ready to start.

Master classes will be held in schools, including in remote areas, camps and universities.

The master classes will be held in accordance with the International Guidelines for First Aid and Resuscitation, IFRC, Geneva, 2020.

The Other Side Of The Fighting In Donbass: UNHCR Will Support The Russian Red Cross For Refugees In Russia

Mercury Poisoning: What You Should Know

Lviv, a tonne of humanitarian aid and ambulances from Spain for Ukraine