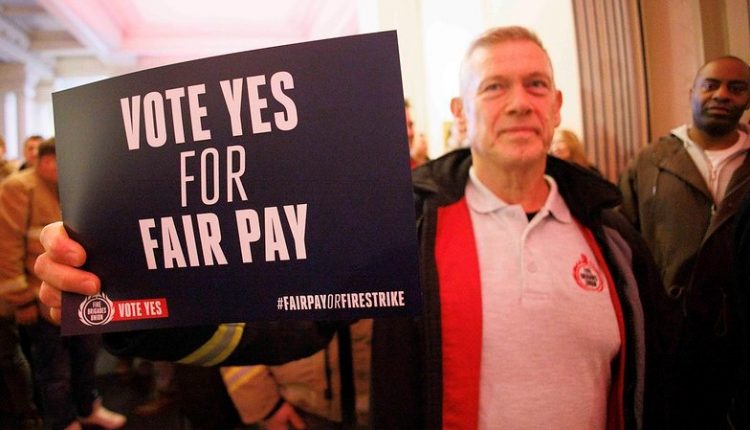 The controversy involving the UK rescue world does not spare firefighters: FBU pillories fire station chiefs, who according to the union do not demand more money for their rescuers because they are less involved in the issue

Firefighters in the UK, FBU denounces

Chief fire officers are paid an average pay of £148,000, with the highest being £206,000 – over six times more than an ordinary firefighter.

The stark inequalities in pay for firefighters and management were revealed in data released as a result of Freedom of Information requests.

The staggering sums are paid to top level management while some firefighters have to rely on food banks and take on additional jobs to afford the basics.

Meanwhile, firefighters and control staff working under senior management are being forced into a ballot for industrial action”.

UK: firefighters and control staff have rejected a 5% offer, with inflation currently at 10.7%

“After a decade of below or at-inflation pay settlements, the Fire Brigades Union has had reports of firefighters and control staff being forced to foodbanks and struggling to pay their bills.

This most recent pay offer, a ‘real terms pay cut’, has led to a ballot for strike action.

The news comes against a background of fire bosses undertaking a number of activities on the pay dispute including meetings and written communications to FBU members.

Much of this interference has been with the intention of dissuading firefighters and control staff from taking industrial action.

These communications have included seeking expressions of interest in working during strikes and highlighting pay that would be lost.

In North Yorkshire the fire and rescue service provided a calculator to staff to highlight how much they would lose in pension and pay if they took strike action. The chief fire officer there is on at least £128,647.

In London commissioner Andy Roe has held meetings with staff, and issued a circa 20 page memorandum seeking to persuade against rejecting the 5% pay offer. He is paid £206,040 a year.

Many other services have undertaken similar activities.

A competent wholetime firefighter is paid £32,244.

TECHNOLOGICAL INNOVATION AT THE SERVICE OF FIREFIGHTERS AND CIVIL PROTECTION OPERATORS: DISCOVER THE IMPORTANCE OF DRONES AT THE FOTOKITE BOOTH

“Firefighters and control staff are facing yet another real terms pay cut while fire chiefs rake in huge salaries.

FBU members are increasingly facing real ‘In Work’ poverty, with firefighters having to rely on foodbanks and take on additional jobs to afford the basics.

At the same time, some fire chiefs are also trying to persuade firefighters and control staff to step back from industrial action, to simply shut up about salaries that are several times smaller than their bosses.

It’s insulting and stinks of hypocrisy of some chief officers who refuse to make the case for better pay for their workers.

Chief fire officers are not worth six times more than firefighters, it was the latter who were called key workers during the pandemic delivering vital services including moving the bodies of the deceased.

Firefighters and control staff are being left with no other choice but to take action.”

High fever in children: what is important to know

Bone scintigraphy: how it is performed